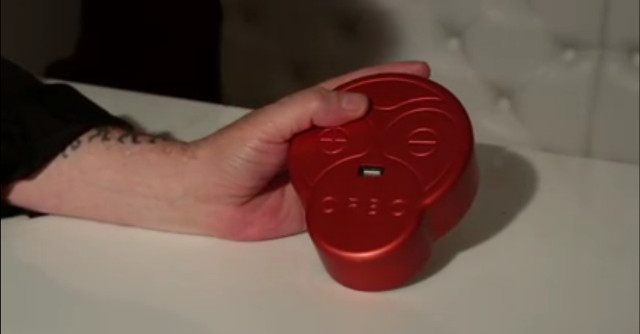 Last week a small company in Dublin called Steorn started taking orders for their USB phone charger. It's on the large side, and is only good for two or three smartphone charges per day, or one tablet charge. So then, why are they asking 1200 euros (about $1275) each for them? Well, for one thing, you don't have to plug them in. But there are other, much cheaper chargers that draw their power from sunlight or some other source and never need to be plugged in. With Steorn's OCube charger you're not paying for convenience, you're paying to be one of the first to own a device that does the impossible -- and that might be on the verge of revolutionizing science and technology.

Or at least, that's what Steorn would have us believe.

The OCube is the latest iteration of Steorn's Orbo technology. According to Steorn's CEO Shaun McCarthy, engineers there were working up a design for a wind-driven generator to power ATM security cameras back in 2003, when they stumbled upon a strange effect: the generators were putting out more power than they were taking in. Steorn spent the next few years ruling out potential sources of experimental error, and then trying to understand the theoretical basis of the anomaly. Finally they convinced themselves that there was no getting around the conclusion that they'd invented a perpetual motion machine. They'd found a loophole in the way that magnetic fields interact that allowed the law of conservation of energy to be broken, and caused so-called "free energy" to be generated: energy from nothing.

A technology that generates free energy would of course be enormously valuable for an endless range of applications, from eliminating the need to burn fossil fuels, to making clean water and electricity cheaper and more accessible to billions of people. It's no wonder then that history is littered with claims of perpetual motion machines, many of them outright hoaxes, and none of them ever having resulted in a practical device. In this context, Steorn found that no academic scientists were willing to endorse their technology, and without scientific backing, no manufacturers were interested in licensing it. So, they decided to reach out directly to the public.

In 2006 Steorn ran a full page ad in The Economist, flaunting the impossibility of their claim with the George Bernard Shaw quote, "All great truths begin as blasphemies." The ad offered "a world with an infinite supply of pure energy" and asked for scientists and engineers to apply to be part of a "jury" of experts Steorn was assembling, who would test their technology and go on the record with the results. This was the highest profile free energy claim in recent memory, and it drew a lot of attention -- even Michio Kaku took the time to come out against it. "It's a fraud," he told ABC News, "It's not possible. You can't sue me for quoting the rules of physics."

In 2007 Steorn set up a highly polished weekend-long public demonstration of their technology, now dubbed Orbo, at the Kinetica Museum in London. Press releases showed an elegant device, a simple wheel with four magnets set into its edges, mounted in a plexiglass frame and surrounded by an array of magnets fixed at angles along its perimeter. The big day arrived and the demo was... delayed. Then delayed again. And finally cancelled. The device failed, and Steorn blamed it on the hot lights beating down on the museum installation. Then in 2009, Steorn's hand-picked jury of experts came out with their verdict: they had been shown no evidence that Orbo generated excess energy. Finally at the end of 2009 Steorn held another public demo, this time in Dublin. They showed off a new version of their Orbo technology. This one replaced the outer set of permanent magnets with electromagnets, and it was claimed to produce some three times the energy it consumed. However, it was connected to a battery that drove those electromagnets (which it was said to continuously recharge, but which could just as well have been providing all the power itself) and its claims of excess energy production were supported only by cryptic and inconclusive calorimetry tests and oscilloscope readings. This last demo failed to impress, and in the wake of their previous failures, it was widely believed that the world had heard the last of Steorn.

But that was not to be. Over the years since, Steorn has managed to convince enough of the right people of the credibility of their technology to gather themselves 20 million euros of investment. They've spun off a separate company, called HephaHeat, to focus on water heating applications of the Orbo technology (HephaHeat is said to have contracts with major water heater manufacturers, but as of yet no products have been announced). And just recently, in a series of online videos, Steorn has unveiled yet another version of Orbo, a "Never-Die Battery" that directly produces electricity without the need to be recharged, ever. Shaun McCarthy has demonstrated the basics of how this new Orbo is put together: it's made of layers of dissimilar conductive metals, with layers of a non-conductive "electret" material sandwiched between them (an electret is a material with an electric field frozen in place, similar to how a permanent magnet has a magnetic field frozen in place). According to McCarthy, this new Orbo works on the same underlying principle as each previous iteration, though you wouldn't know by looking at it; there are no permanent magnets, no electromagnets, no moving parts or control circuitry.

What makes this episode different from each of Steorn's previous adventures is that for the first time they are making Orbo-powered products available to the public, to be put to long-term use, tested, and torn apart. Their first products are clunky, impractical and overpriced: the 1200 euros phone charger is to be followed in early 2016 by a 480 euros retro-style non-smart cell phone that never needs charging. Later offerings will include an e-cigarette and a wireless game controller. But the impracticality of this motley collection of devices is beside the point: Steorn wants to get Orbo into as many people's hands as possible, so they won't need the blessing of academic science. People will find out for themselves that Orbo works, and proclaim it over and over on the internet, until the rumble is loud enough that scientists have to take it seriously, and manufacturers want to license it. Then Steorn can leave product development to others, while they focus on lowering the cost and improving the energy density of their core technology. Eventually, Orbo will power every phone, every car, maybe even everything. That seems to be Steorn's hope, anyway.

To pull this off, they just have one final hurdle to prove they can overcome: the law of conservation of energy, one of the most basic building blocks of modern physics. Conservation isn't just a pattern that's been seen experimentally again and again; it's the mathematical foundation from which much of physics is derived. For example, conservation has caused physicists to hypothesize the necessity of new, never-before-seen subatomic particles, and the existence of these particles was later confirmed experimentally. Some would say that violation of the law of conservation of energy is unthinkable, because if it didn't work, then all of the electronics and other technology we've built on the back of our understanding of physics wouldn't work either. Then again, paradigms do change in science, and classical Newtonian mechanics fit nearly all the experimental data and formed the basis of a lot of successful science, before being replaced by a more complete understanding in the form of relativity. Overturning science is an extremely high bar for Steorn to vault, but it's not necessarily impossible.

If you're interested in finding out whether (and how) Steorn's Orbo technology works, but don't have the money to spend on your own OCube or the expertise to figure out what makes it tick, there's another way to get involved. A group of PhD engineers and scientists from Aalto University in Finland is holding a crowdfunder to raise enough money to purchase an OCube, so they can test it and figure out how it works. A documentary crew is following this project, and contributors will receive a DVD of the finished film.

This is a decisive moment for Steorn; once they start taking payments for orders, they're legally obliged to deliver the miracle they've claimed, or else they're on the hook for fraud. It might be the beginning of the end for Steorn, or just the end of the beginning. Either way it continues to be an entertaining ride. And if a future of abundance and the end of global warming just happen to come out of this, so much the better. I plan on ordering my own OCube and putting it to a long term test. For updates, you can follow my blog, Dispatches from the Future.

Michael Ferrier is a cognitive scientist, game developer, and curious soul who lives surrounded by chickens in the woods of southeastern Massachusetts. He's been blogging about the mystery that is Steorn since 2007.

Here’s a good video that describes the laws of thermodynamics in an intuitive way, and why perpetual motion machines won’t work.

Can you spot how this "perpetual motion" machine works?

Remember the perpetual motion machine called Orbo? It's back!

I’ve been following news about a company called Steorn for many years now. They claim to have developed a technology that generates more energy than it consumes. Every time they’ve had a public demonstration, it doesn’t work. I’m not surprised. I thought they’d given up, but they are back. And they have a new video, […]