One billion Creative Commons licenses in use 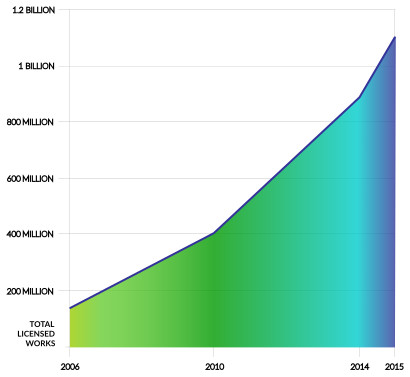 Jane from CC writes, "Creative Commons, the global nonprofit that makes it easier for creators to share their work under simple copyright terms, announced a major milestone in the release of its 2015 State of the Commons Report today: over 1 billion works have been licensed using Creative Commons since the organization was founded."

It’s been a remarkable year, most notably for the more than 1.1 billion works under one of the CC licenses, CC0, or the public domain mark. CC licenses offer an elegant solution; a release valve to the constraints of copyright. But it’s much bigger than that: Creative Commons has become a steward of our global commons, a universe of openly-licensed content that has the power to spark everyday ideas and solve global challenges. We’ve unlocked the door to an alternate reality of free and open content, powered by millions of creators who share our values.

But the key challenge facing the commons today isn’t quantity – it’s usability, vibrancy, and collaboration. Today’s web is social and interconnected, and it has completely changed the way we share, tell stories, and build communities. While integral to many kinds of creativity and sharing, Creative Commons has yet to fully activate the content and creators in our movement. We need our contributors to be able to talk to each other, find new content, give feedback, offer gratitude, get analytics, and build networks around the content they are creating. We need to light up the global commons.