The politics of prejudice: how passports rubber-stamp our indifference to refugees 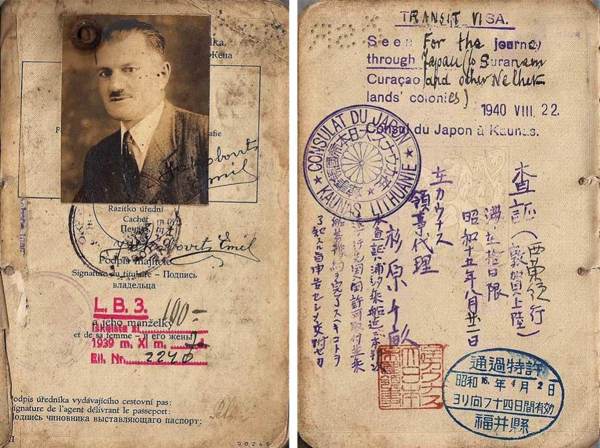 When Hunter Oatman-Stanford began working on an article about Neil Kaplan's collection of old passports, we had no idea his story would be so timely. Alas, the acts of terrorism in Paris, followed by the backlash against Syrian refugees, and then a certain political candidate's proposal to block all Muslims from immigrating to the land of the free, has given Kaplan's collection of old paper new meaning.

Of the 2,000 passports in Kaplan's collection, most show how shabbily Jews were treated while trying to escape the Holocaust during World War II, although a few also reveal acts of great bravery by customs officials who knew that if they followed the rules, the person standing before them would likely die in a concentration camp.

How did specific diplomats use their position to save lives during periods of conflict?

Kaplan: Toward the end of the ’30s and into the beginning of World War II, most countries were very strict with their visa-issuing. I think these regulations were implemented specifically to prevent Jews from arriving in those countries. Sometime in October 1941, the Germans decided not to permit any Jews to leave their territory. They were implementing the Final Solution, so they weren’t allowing Jews to escape.

But at the time, several diplomats had something in them most people don’t, and decided to do the right, honorable thing—not to follow the rules and orders given by their foreign ministry. Many people who are under pressure or in danger decide not to help others, or freeze up because they’re not accustomed to this type of situation. Yet these diplomats understood that people’s lives were involved, and because of their integrity, they decided to act.

Chiune Sugihara was a Japanese vice-consul stationed in Kaunas, Lithuania, in 1939 to supervise the German and Russian forces as part of the Axis powers, and report back to Tokyo. Sugihara was given a “no” from the foreign ministry in Tokyo, but he still decided to help. The Soviets would not allow Lithuanians to cross into Siberia without a final destination, so Sugihara worked together with the Dutch consul in Lithuania to issue a ridiculous visa for travel to Curaçao, which was a small Dutch colony in the Caribbean. Once that was inside the passport, it was easy for Sugihara to give them a transit visa to Japan, where they could catch the boat to Curaçao, though the majority stayed in Japan.

• The change is expected to be a massive expansion of the government’s power to seize, detain, and abruptly deport. • Previously, “expedited removal” was limited to undocumented immigrants caught within 100 miles of the U.S. border who had been in the U.S. for less than two weeks. The Trump administration’s extrajudicial ‘Expedited Removal’ of […]