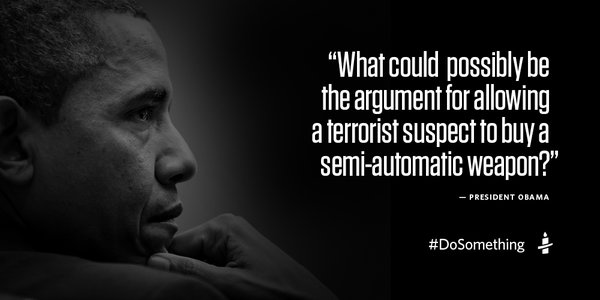 Whatever you think of gun control, Obama's assertion that "Closing the No-Fly List loophole is a no-brainer" is pretty brainless.

The no-fly list, a notorious, secretive, evidence-free zone in which Americans and foreigners alike are denied the freedom of movement based on secret, sloppy evidence that no is allowed to see or refute, is a terrible proxy for "people who should be treated as suspicious."

This is an issue that the political left and libertarians have been all over for more than a decade. The American right seems to be finally waking up to the Kafka-esque absurdity of the no-fly list now that Obama is proposing to ban gun ownership for people who end up on it.

According to the FBI’s terrorist screening center, which maintains the list, there were approximately 16,000 people, fewer than 500 of them Americans, on the no-fly list as of September 2011. This had risen to 47,000 people in August 2013, including about 800 Americans, a leak to the Intercept news media site revealed.

The numbers are thought likely to be higher now but the FBI declined to comment.

Dave Joly, a spokesperson for the screening center, said that it did not publicly confirm or deny whether someone was on the list.

“Disclosure of an individual’s inclusion or non-inclusion in the TSDB [Terrorist Screening Database] or on the no-fly list would significantly impair the government’s ability to investigate and counteract terrorism,” Joly said.