This Zoetrope will have you mesmerized 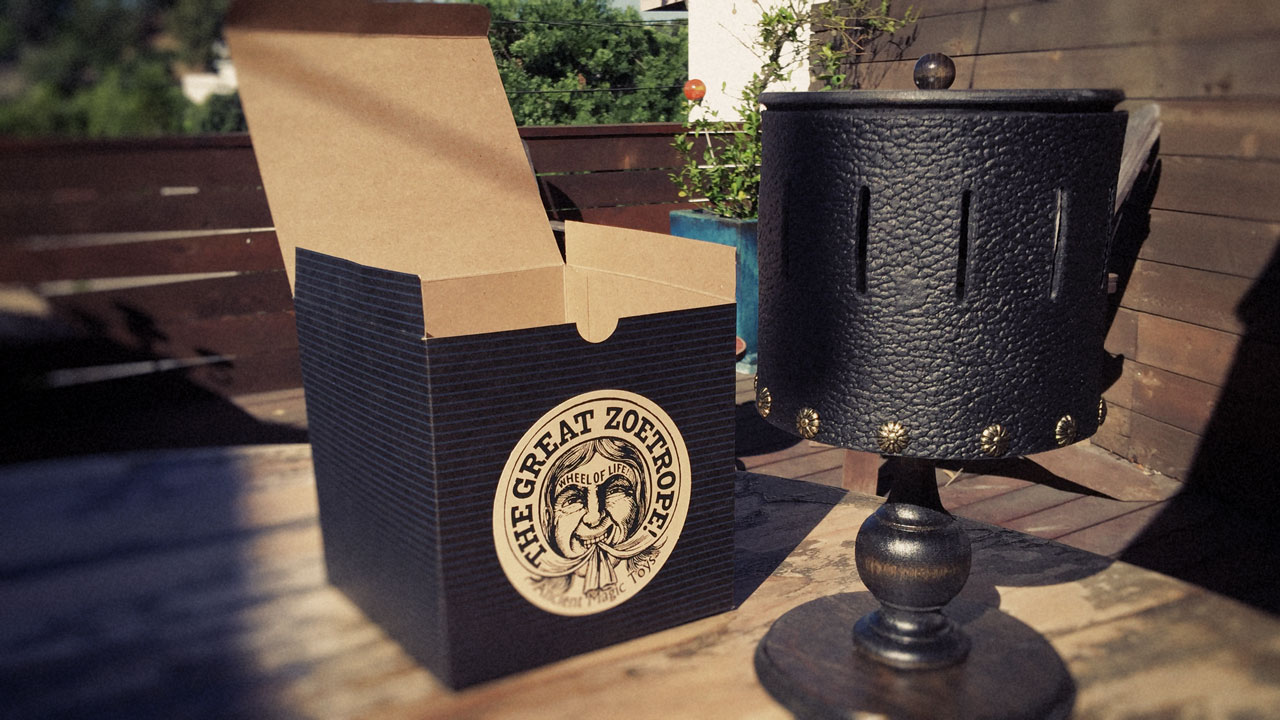 This Zoetrope will have you mesmerized

From a very young age, the illusion of motion fascinated me.

I would spend hours and hours destroying the books in my parents' library by creating crude, hand-drawn flipbooks in the margins. Pictured below is a rare 1890s sketch of my hands at work during the creative process.

This sort of activity helped set the stage for what would be a career-long pursuit.  I tinkered with countless pieces of art that would make up just a moment of entertainment for anyone willing to take notice.

We're all enticed by beautiful patterns, pleasing repetitions and a concisely-delivered story. Here are a few tales that are told in just 12 frames apiece. My favorite is the 3rd horizontal strip from the top. It’s the one of the man happily dancing in place, while passing his severed head to his clone, who does the same ad infinitum.

It is, as all of these are, simply beautiful!

And that brings me to the Zoeflix, which hits the nerve of what I love in so many ways.

1) It’s beautiful to look at and hold

2) It’s made of wood and not plastic

3) It moves and operates by my own force

5) It has a great history

The Zoeflix is essentially a Zoetrope device that, when spun, produces an illusion called the phi phenomenon. This is the optical illusion of perceiving a series of still images as a continuous motion when viewed in rapid succession.

The Zoetrope has had many names over the years and I’m going to explore a few of them here. Firstly, the word zoetrope has Greek roots with the words zoe, “life” and tropos “turning”. Because of this, it became known as the “Wheel of Life”.

The faster you spin the device, the smoother the illusion becomes—and the name “Wheel of Life” is perfect for obvious reasons.

But the Zoetrope was first called a daedatelum by its inventor, George Horner, in 1834. The name was a reference to Daedalus, the most amazing sculptor/inventor in Greek mythology. He famously carved figurines so lifelike that people thought they could and would move.

In the same way that Daedalus was thought to bring life to the inanimate, so did George Horner with his invention. Back then, the device was known as “The wheel of the Devil”.

His invention didn’t become widely known until after his death, when a man named William F. Lincoln promoted the device in America as the Zoetrope.  Changing the name was a smart move since any campaign around selling a product with the devil as its mascot might be seen as off putting.

But then again, who could forget the famous Underwood Deviled Ham campaign of 1953? I Certainly can’t!

You may remember from your Greek Myth class that Daedalus caused the death of his only son. Daedalus lived in Crete and was the lone man who knew the layout of the labyrinth he created to contain the Minotaur for King Minos.

Because of this special knowledge, he was shut up in a tower with his son, Icarus, so that the secret would not be revealed.

To liberate themselves, Daedalus fashioned a set of wings with feathers, string and wax and learned to fly.   Upon their escape, Icarus flew too close to the sun, which made the wax on his wings melt. As a result he fell into and drowned in the sea.

Daedalus became horrified at this and cursed his own inventiveness. Athena took pity on the now devastated Daedalus and visited him.   As his reward for killing his only son, she gave him real wings so that he could fly like a god… which was nice. I guess she felt that he needed a constant reminder of what he’d done.

With that, it’s very clear what my first Zoeflix animation will be! It’ll be of Daedelus forever hovering in the air while gently flapping his wings - the reason will be our little secret.

I'm convinced that anyone who touches this device will fall in love with it, and unlike an old View-Master where only one person at a time can partake in the magic, a Zoeflix animation can be viewed from 360 degrees.

The $49.00 package comes with 14 different animation sheets and a beautiful light fixture on the bottom of the lid that makes viewing in the dark even better.

The folks at the Ancient Magic Art Tools website have a $14.99 option for those who want a cheaper option.

just look at it