What Jules Feiffer taught me about writing for kids 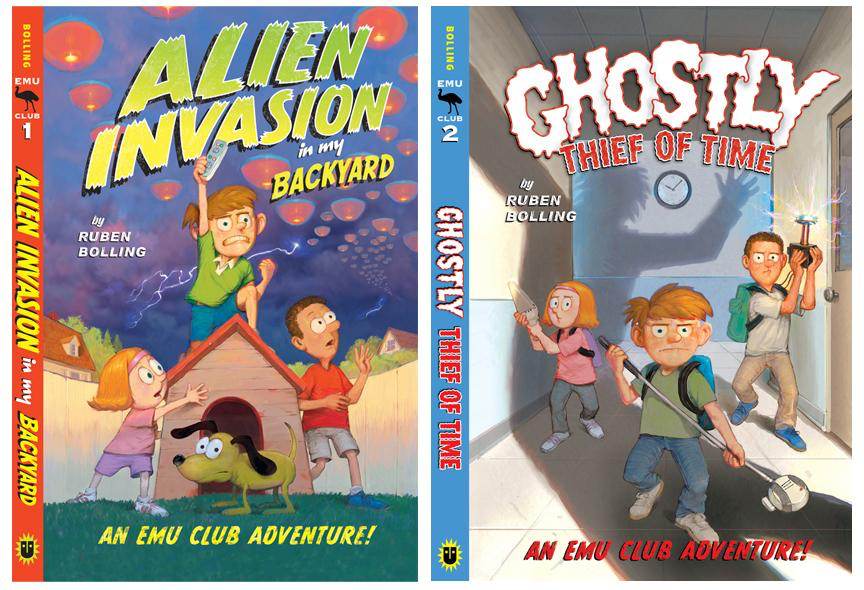 What Jules Feiffer taught me about writing for kids

25 years into creating my comic strip “Tom the Dancing Bug,” I’ve just embarked on another venture: writing books for kids. My series of books, The EMU Club Adventures, began in April with Alien Invasion in My Backyard, and the second installment, Ghostly Thief of Time, was released last month.

Now, “Tom the Dancing Bug” is certainly not for kids, but writing for kids was something I’ve always wanted to do. I love kids’ literature and culture, and I love kids; if I’m at a gathering of friends and family, you’ll probably find me laughing it up with the kids.

But as I started this new task, I was kind of worried about whether I could write for an audience that wasn’t me. My comic strip is pretty much what I would want to read – would consciously writing for another audience render the work stilted, off-target, or even pandering?

I once saw Maurice Sendak, one of the very greatest children’s authors ever, tell Stephen Colbert in an interview, “I don’t write for children. I write – and somebody says, ‘That’s for children!’”

Well, I’ve spent a lot of years showing myself what I write, and it’s usually satirical or absurdist takes on things like income inequality, religion, and the new economy. None of which a kid with any good sense would have any interest in.

As I began my project, I happened to go to a panel discussion of children’s authors at the New York Public Library, because some of my kids’ favorite authors were participating. A question was posed to the panel: “Do you write for yourself, or for children?”

One after another, these accomplished authors repeated Sendak’s sentiment: they write totally for themselves, and then, lo and behold, it is children who enjoy the product. It struck me as kind of odd, because one of them had even written an ABC book. Is that really the book she would have written, regardless of intended audience?

When the question came to Jules Feiffer, a legendary cartoonist/playwright for adults who became a children’s book author later in life, he gave the very simple answer that blew my mind and became my North Star in writing my books.

He answered: “Both. I write for the kid in me.”

Maybe it’s the very reason I wanted to write kidlit, but I happen to have a kid in me, and I don’t have to dig very deep to find him.

I ended up writing exactly the books I would have liked when I was a kid: funny adventure stories about a gang of kids in fantastic situations, full of plot twists and surprises. Secret tunnels, ghostly visions, aliens and robots.

And they are exactly the books that the kid currently in me likes.

In addition, I realize now that when I write “Tom the Dancing Bug,” I’m not really writing for some abstract, whole “me.” I’m writing for the adult in me – that part of me that is interested in sketch comedy, absurdist humor and political and social satire.

But, speaking of plot twists, here’s the M. Night Shyamalan-type kicker at the end of the story: It turns out that even as I wrote my very grownup comic strip for 25 years, I’ve been also writing for the kid in me the whole time!

When I want to write about income inequality, I use “funny animal” Carl Barks-like comic book characters.

When I use strange, absurdist humor, it’s often contrasting something dark or ridiculous against a children’s medium, such as daily comic strips.

When I want to write about religion, I use a brightly colored, caped superhero.

When I want to write about the new economy and its effect on employment, I use a Richard Scarry picture book format.

One of my main (maybe only!) techniques as a satirist is to juxtapose the innocence of children’s culture with a darker point about adult world.

The difference is that in my kids’ books, I don’t subvert kid-culture, I create it. I play in it.

Writing these books was one of the most joyful experiences of my career. Like my three kid characters, I’ve been on a brand new adventure, looking at the world in a different way and taking risks.