Bernie Sanders was more popular than Trump, but the press ignores him 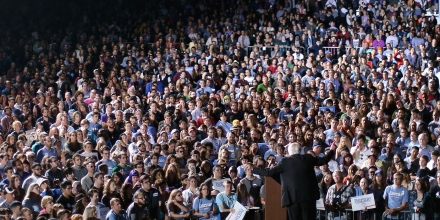 About 16 percent of Americans identify Bernie Sanders as their top choice for the next president; Trump is preferred by about 11 percent of the population -- Sanders is nearly 50% more popular than Trump, but Trump outperforms him in press headlines by as much as 23:1.

Part of that, of course, is that Trump does a lot more "newsworthy" (that is, surprisingly stupid) things than Sanders. Merely saying things that are sane and even presidential isn't as fascinating as being batshit crazy in public while being cheered on by people who can apparently dress themselves. There's a feedback loop here: the press love to lavish attention on Trump because it spurs him to saying more crazy things. As the CEO of CBS recently said on a recent investor call: "Go Donald! Keep getting out there!"

The other part, though, is that Sanders has been treated as "unelectable" by the press since he joined the race. In this regard, he is in good company with Jeremy Corbyn, who won the leadership of the UK Labour Party with an unprecedented majority, and whom the UK press (and the Labour establishment) consistently dismisses as out-of-step with the electorate.

The Intercept searched Nexis’s database of transcripts for news shows on CNN, MSNBC, ABC, CBS and NBC from the past 30 days, looking for mentions of Trump or Sanders in the headline or opening paragraph. Nexis doesn’t collect everything, so the results are not reliable for absolute measurements, but they do allow for comparisons. There were 20 hits for Sanders; 690 for Trump.