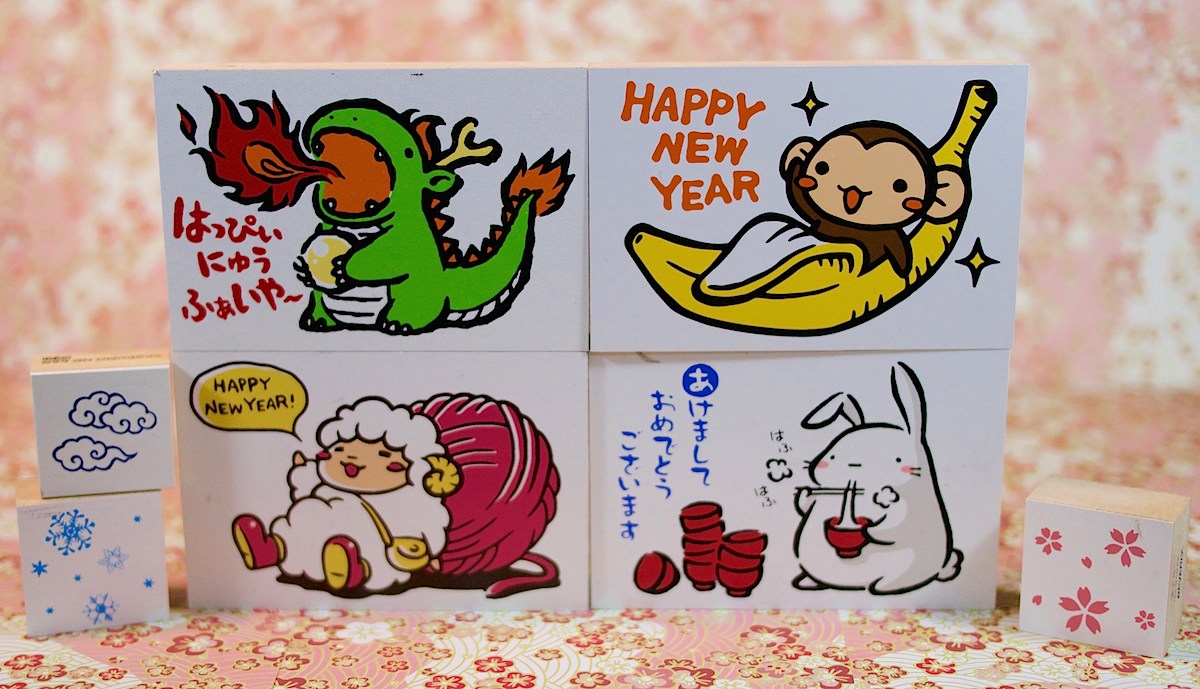 Here in Japan, ’tis the season to make nengajo. Nengajo are specialized New Year’s postcards sent to friends, relatives, acquaintances, former classmates, current classmates, co-workers, and anyone and everyone else in one’s contacts list.

These days, the vast majority of nengajo are either pre-printed or made on a computer and printed at home. Even then, however, many people still make a few cards by hand with stamps and ink. To that end, every year, stores display and sell rubber stamp and ink pads, along with markers, glitter, and all kinds of other utensils and accessories. The stamps are made primarily by two companies: Beverly Japan and Kodomo no Kao (Child’s Face). Both companies produce a full line of New Year’s themed stamps as well as stamps featuring popular characters like Snoopy, Doraemon, and Hello Kitty.

2016 is the Year of the Monkey in the Chinese Zodiac, so, for my card this year I chose a stamp called “Banana Kara Konnichi wa,” or “Hello From the Banana,” and a small banana stamp for accents. I toyed with using a multicolored ink pad but, in the end, I chose a standard black ink pad for the outline. Once I had the outline stamped on all my cards, I colored the cards using stiff brushed markers. I used the same marker to color directly onto the banana stamp in lieu of using an ink pad and it worked very well. What I have yet to do is write individual messages on the cards and then haul them down to the post office to be stamped (different kind of stamp!) and sent. But, one step at a time!

Buy one on Amazon

Hello From the Banana!