Detangling enthusiasts trade snarled yarn to tease back into order 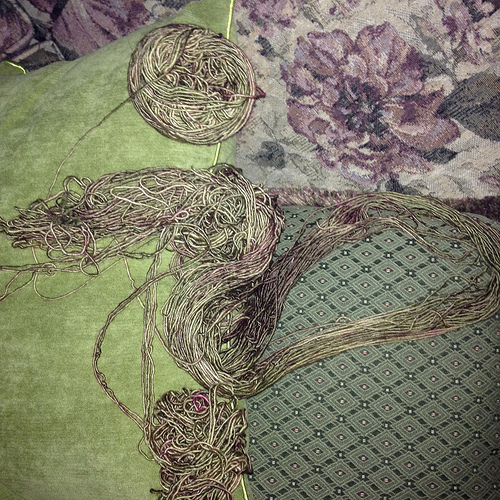 Online communities like Ravelry's "Knot a Problem" invite knitters to ship them their most tangled yarn, which they patiently unravel and wind into usable skeins, as a kind of knitting-adjacent hobby, one that combines problem solving with topology.

The most acclaimed project in the group’s tangled history is known to knitters as “the Stash Disaster of Epic Proportion.” In 2011, a Sacramento, Calif., knitter was cataloging her entire stash of yarn in her backyard—only to leave it out during a rainstorm. She tossed the 30 to 50 balls of soaking-wet yarn into the dryer, producing further chaos.

More than a dozen volunteers stepped up, “drooling over the delicious detangling it promises,” as one member put it. The project, about the size of a lamb, was carried in a bedsheet to places such as a library and a park, where detanglers picked at it together. It also made its way to the homes of several detanglers.

“Best of luck to the next detangler,” one of the volunteers wrote. “This one, I regret to say, defeated me.”

The final unraveler, Melissa Kwan, 30, of Irvine, Calif., says the mess “kind of just lived on the floor of our apartment” for months. She posted photos of the slowly shrinking mass, with balls of green and red and pink emerging until only a ball of sock yarn and the fuzz of unusable mohair were left. On March 24, 2013, she posted a final photo and the message: “Disaster Handled.”