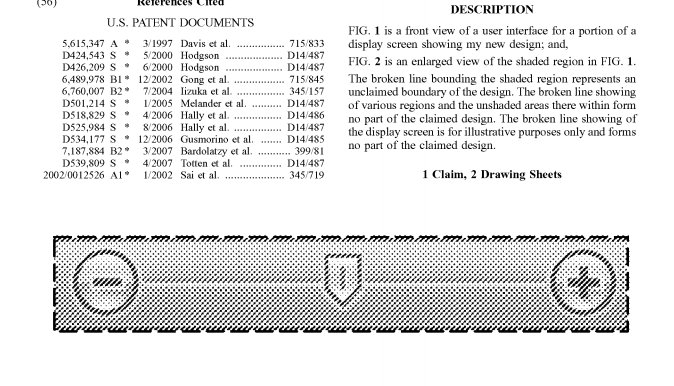 EFF has awarded its coveted Stupid Patent of the Month prize to Microsoft for D554,140, a design patent on a slider widget for a UI.

Microsoft filed the patent for the slider in 2006, and is currently using it to sue Corel, arguing that Corel owes it all profits earned on Corel Home Office, under a doctrine set out in the bizarre Apple v Samsung patent dispute.

Samsung has now asked the Supreme Court to weigh in. In its petition for certiorari, Samsung points out the absurd results of this rule. For example, Samsung explains that under the Federal Circuit’s ruling, “profits on an entire car—or even an eighteen-wheel tractor trailer—must be awarded based on an undetachable infringing cup-holder.” In addition, given that many products will include multiple ornamental features that could be covered by design patents, this raises the possibility that a company could get hit for multiple judgments for all its profits.

That sounds pretty crazy to us. But that’s exactly what might happen if Microsoft prevails against Corel. Putting aside whether Microsoft’s design was actually new and not obvious in 2006 (when Microsoft filed its application), whether Microsoft needed the patent incentive in order to come up with this design, and whether it is even desirable to grant a company a government-backed monopoly on a graphical slider (we don't think so, that's why this is a stupid patent), the scope of damages for design patent infringement has the potential to become a powerful tool to shut down legitimate competition based on the mere threat of a lawsuit.

Stupid Patent of the Month: Microsoft’s Design Patent on a Slider
[Vera Ranieri/EFF]