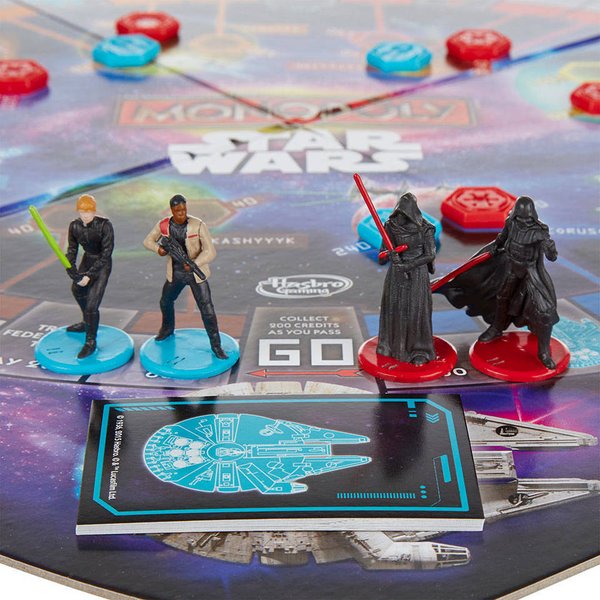 Rey, the female lead of Star Wars: The Force Awakens, is not among the character tokens one may play in the film's tie-in version of Monopoly. Featured are only male characters, including one not even present in the new movie.

It is the latest in a line of official merchandise that has drawn ire for prioritising less prominent male characters over Rey. … A Star Wars figurine pack released by Target also failed to include Rey or other new female Star Wars characters such as Captain Phasma, played by Gwendoline Christie. The six featured characters are Kylo Ren, Chewbacca, Finn, Poe Dameron, a Stormtrooper and a TIE Fighter pilot.

Hasbro, the game's maker, claims that including Rey would have been a spoiler.

…Julie Duffy, the company's Global Communications vice president told the Daily News. "Rey was not included to avoid revealing a key plot line that she takes on Kylo Ren and joins the Rebel Alliance," she said.

Slightly less laughable is the excuse sometimes aired that, as there is an individual figurine for Rey available, people should stop complaining about the sets from which she is excluded.

After all, TIE Fighter pilot is a very important character.

Someone seems to be missing in Star Wars Monopoly. Unbelievable. #whereisrey pic.twitter.com/NKceWEKVbZ