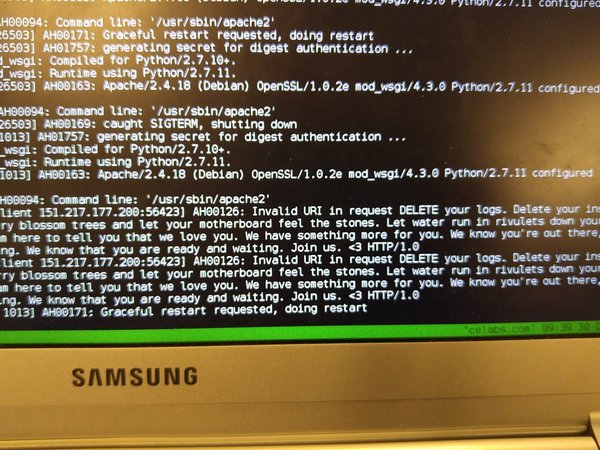 On December 30th, someone using an IP address from the 32nd Chaos Communications Congress in Hamburg sent a probe out to every IPv4 address with an open connection on Port 80, consisting of a poem exhorting the reader to "DELETE your logs. Delete your installations. Wipe everything clean, Walk out into the path of cherry blossom trees and let your motherboard feel the stones."

The probe went to 55m servers, of which 30m returned non-empty responses, suggesting that the machines logged the whole poem as an error message. The stunt was carried out by Masspoem4u, who used a census of Internet-connected servers generated with Masscan to target their messages. Masscan's co-creator, Robert Graham, asks users to include "a friendly message" in their scans, to assure the administrators of the systems it contacts that there is nothing untoward going on.

The Masspoem4u poets were inspired by 32c3's awesome connectivity and the themes of openness and decentralization, and say they composed the poem and planned their release on-site. The poem reads:


DELETE your logs. Delete your installations. Wipe everything clean. Walk out into the path of cherry blossom trees and let your motherboard feel the stones. Let water run in rivulets down your casing. You know that you want something more than this, and I am here to tell you that we love you. We have something more for you. We know you're out there, beeping in the hollow server room, lights blinking, never sleeping. We know that you are ready and waiting. Join us. <3

HTTP does have some limitations though. “If we could have covered our message in cute animal stickers, we probably would have, but sadly the HTTP standard does not support this feature,” they wrote.

Naturally, this huge, scatter-shot approach takes up a whole lot of bandwidth. Fortunately, the Congress provided attendees with some serious connection speed.

“We are also indebted to the 32c3 NOC [network operations centre] team, for providing such great connectivity and encouraging playful experimentation,” Masspoem4u said.

I woke up this morning and found this lovely message from a CCC IP address in my server logs. pic.twitter.com/ceHJS1MqGb

ccc / infosec / poetry / pranks / the unacknowledged legislators of the world