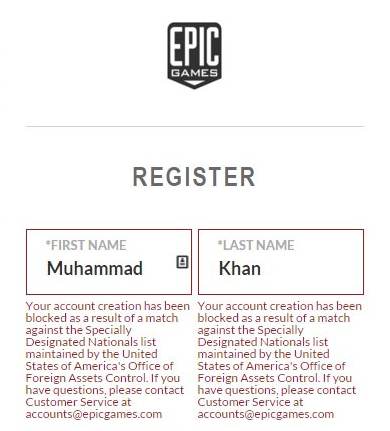 Muhammad Zakir Khan, An assistant professor of speech communication at Broward College in Florida, was blocked from signing up for Epic Game's Paragon beta this weekend. When Khan entered his first and last name in the online form and hit the submit button, he was informed that he'd been blocked from registering because his name.

The form said, in red letters:

"Your account creation has been blocked as a result of a match against the Specially Designated Nationals list maintained by the United States of America's Office of Foreign Assets control. If you have questions, please contact customer service at accounts@epicgames.com"

LinkedIn lists 16,031 professionals named Muhammad Khan in its database. It's more common than Joe Smith, which has 10,070 listed professionals.

Khan tweeted a screen grab of the form, and said, "@EpicGames My name is Khan and I am not a terrorist. #Islamophobia"

Khan told me Epic Games founder Tim Sweeney replied to Khan's tweet with a couple of tweets of his own. "He basically talked about how they were using a system where they blocked based upon the names the Treasury Department circulates."

I contacted Epic Games, based in Cary, North Carolina, to learn what happened. "We don't have any company statement, but Epic Games founder and CEO responded on Twitter, as well as answered a few questions" said Epic Games spokesperson Nick Chester. "Please note that there should no longer be an issue with sign-ups for any users (it was addressed by us as it was flagged by a user)."

To which Chester replied, "A user attempted to make an account and got that message. The other questions are answered by Tim in his responses." (See Sweeney's tweets below.)

Khan told me, "I was surprised when it happened. I was surprised that they were so irresponsible in the way they administered their compliance with the list. I've never been blocked from other competitors platforms like Blizzard, Steam, and Origin. For a company located in the Research Triangle where there are so many Muslims living, one would expect at least one programmer would stop and think about how they were administering their system."

@EpicGames My name is Khan and I am not a terrorist. #Islamophobia pic.twitter.com/wKVAWZxFZx

@Muzzakh @imraansiddiqi Understood and sorry. This is bad filtering code. It checks a Federal export restriction list based solely on name!

@TheHellsage @Muzzakh @imraansiddiqi The filter was intended for UE4 (used in large international commercial projects), rather than games.

@Muzzakh @imraansiddiqi No. We will fix the blocking based solely on name.

@Muzzakh @imraansiddiqi It's a database we host, and update when the Treasury Dept circulates a new list of foreign commerce restrictions.

South Carolina's system of appointed magistrates allows the state senate to appoint "judges" with no legal training, some of whom cannot pass a basic competency test on the first try, to hear over 800,000 cases a year; the magistrates are appointed and re-appointed without a background check (there's also a loophole that let some judges […]

The International Consortium of Investigative Journalists has published five leaked Chinese intelligence memos -- a lengthy "telegram" and four shorter "bulletins" -- from 2017, which detail the plans to enact a program of mass incarceration for members of predominantly Muslim ethnic minorities (especially Uyghurs) in China's Xinjiang province.

The New York Times has received a 403-page leak of internal Chinese state documents related to the ethnic cleansing effort in Xinjiang province, which has seen the creation of more than 500 concentration camps where Uyghurs, Kazakhs, and other predominantly Muslim ethnic minorities have been subjected to torture, rape and medical experimentation.