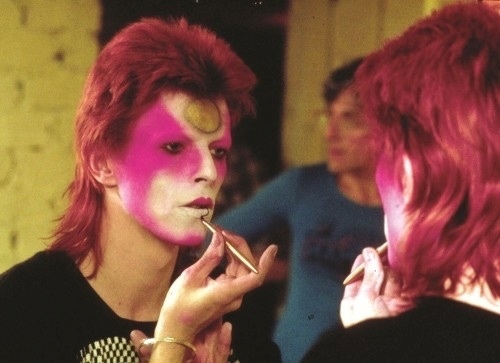 "The stars look very different today." I've written, on several occasions, though most revealingly here, about glam's desperate importance to those of us marooned in the beige, tract-home nightmare of '70s suburbia.

In the soul-killing moronism of the Have-a-Nice Decade, where beer-bong boogie rock ruled and being smart or bookish or gay or genderqueer or, hell, just plain different was an invitation to a stomping, or at least ostracization, Bowie was the Klaatu of weird cool, beaming every high school's freaks to a Mars where oddities ruled. Alone in a bedroom that was a Lourdes of Bowiephilia, wallpapered with full-page photos of La David from CREEM and CIRCUS, I pored over his interviews, gleaning his references to Wilde's "Happy Prince," Nietzsche, Weimar Berlin, Burroughs's WILD BOYS, Lalique glassware, the cut-up method, black noise, Aleister Crowley, Nazi occultism, Beardsley, the Bloomsbury group, Evelyn Waugh's "Vile Bodies," Tod Browning's "Freaks," and countless other points of bohemian/Aesthetic reference I would never have encountered anywhere else, in that pre-Web age.


Bowie taught us everything: About irony, about Wildean wit, about Aestheticism, about the importance of putting your talent into your art but your genius into your life (and that, after Warhol, there wasn't much of a difference, really), about the tediousness of the moral gaze and the fatality of earnestness, about the sexiness of braininess, about the pathologies of hysterical masculinity, American-style. He was postmodern avant la lettre, the first rock star smart enough to have his fame and eat it, too, and when the charms of godhood wore off, he went normcore on us, in the late '70s, shopping at Sears as a conceptual-art stunt. (Or was it?)

He was impossibly clever, an insatiable reader, but my god, those legs. And those cheekbones. And those eyes. He was the Garbo of the Genderqueer, a deep-space beacon of hope not only to bullied gay kids and "sissies" but even to ostensibly straight teens smart enough, and polymorphous enough, to want to rattle the cage bars of normative notions of gender and sexuality.

We live in an age where no one is ugly, an article of P.C. faith whose corollary is, of course, that no one is beautiful, but like Wilde I believe devoutly that beauty, and certainly style, can be their own profundity.

There was a rhetoric in the way Bowie struck his contrapposto poses, philosophy in the way he wore his hat, critique in the way he fixed us with those catlike, alien eyes, a parable in the way he turned an off-the-rack Sears suitcoat into A Bowie Look. Paradoxically, he taught us that, while few of us had the bone structure and cryogenic cool to be Bowie, or even merely Bowie-esque, we could be unimprovably cool, maybe even happy in our own skin, by embracing our weirdness.

“Be yourself," Saint Oscar said. "Everyone else is already taken.”