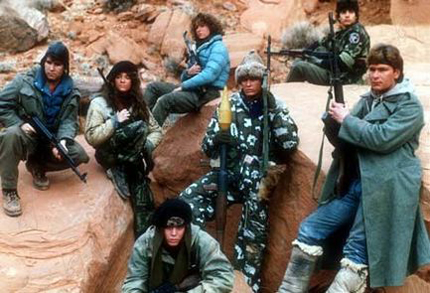 ...and yes, they have committed treason.

“Why are we just apprehending them (…) not lining them up and shooting them? We have to go back to Hitler days and put them all in a gas chamber.” • Remember that US-Mexico border white supremacist terrorist group that published videos of members detaining hundreds migrants at gunpoint, with the Border Patrol’s apparent tacit […]

U.S. military intelligence analysis documents obtained by Newsweek reveal that defense officials do not believe there are terrorists or other national security threats present within the so-called “migrant caravan.” Despite this, Trump has demanded that up to 15,000 military troops be dispatched to the border, to brace for an “invasion” that doesn’t exist, just before […]

The FBI has released footage that shows militiaman LaVoy Finicum’s death at the hands of law enforcement officers manning a roadblock. In the video, Finicum’s vehicle tries to evade the block only to plunge into a roadside snowbank after narrowly missing one of the officers manning it. He jumps out the car with his hands […]