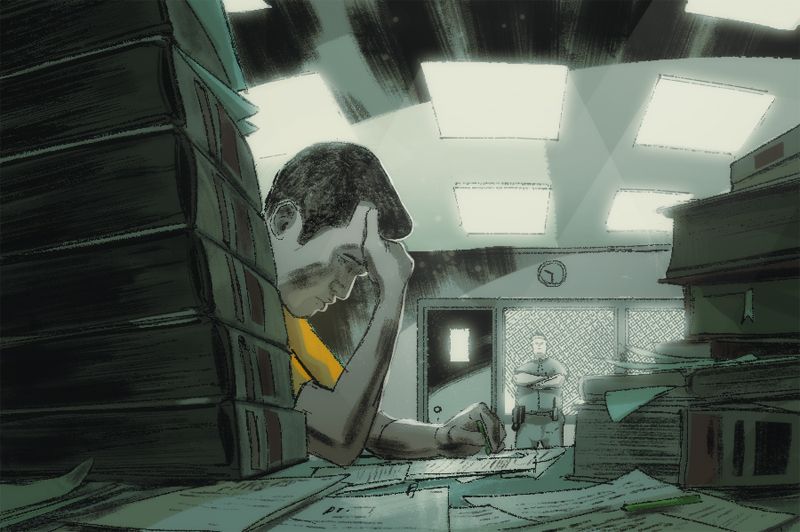 Daniel Rigmaiden was a prolific and talented fraudster who made more than a million dollars filing tax-returns for dead people, using ninja forgery skills and super-tight operational security to avoid arrest for years.

But he was caught in 2008. Somehow, it seemed, the cops had traced the wireless modem he'd bought under a fake name and had sent to a post-office box he'd signed up for under a fake ID, running it down to his apartment (also registered under a false ID).

Once in prison, Rigmaiden became a consummate jailhouse lawyer, firing his lawyers, getting extended access to the law library, and obsessively poring over his case docs, with some procedural advice from another convict who was a disbarred lawyer. Starting with a handwritten investigator's note, "STINGRAY," Rigmaiden seized hold of the thread and pulled and pulled, getting others to search Google for the brand name, uncovering documents in which the Maricopa County board agreed to a purchase of a "cell-simulator device" from the secretive Harris Corporation.

Rigmaiden kept on investigating, looking through Harris's patents and other secondary documents to reveal the existence of a secret investigative technology, the Stingray, which impersonates a cellular mast and harvests the identifiers of nearby phones. Harris -- worried that criminals will take countermeasures -- demands secrecy covenants from its police-force customers, and police routinely ask for warrants to use the technology without divulging its existence to judges.

Rigmaiden contacted Christopher Soghoian, a surveillance-researching PhD candidate (who would go on to work as a technologist for the ACLU), who connected him with EFF and the ACLU. The result was the slow unravelling of Harris's secrecy, and the revelation that local, state and federal law enforcement had been deceiving judges, potentially spoiling many of their convictions.

As for Rigmaiden, he got early parole, which he credits to his relentless filing of motions and civil suits against the FBI. "I was giving them so much work to do and it was pushing their resource limit."

Now paroled and living in Phoenix, he sometimes addresses defense attorneys about Stingray use. Defense attorneys in Stingray cases have formed networks through which they swap tips about the secrecy practices of law-enforcement, and how to use them to get their clients off.

But purchasing the device came with a catch. Every time an agency bought a device from Harris, they signed an agreement to keep it out of public court records. If Stingray methods were ever entered into evidence, Harris argued, criminals would catch on, rendering the device useless. Agencies still got court orders to use the devices, but they usually looked like a vaguely worded request for phone records. In most cases, the judges never knew what they were signing and defendants never knew how they’d been caught.

But they couldn’t hide every trace. Rigmaiden found signs of Harris’ Stingray device in random corners of the web. He searched through Harris’ patent filings, which gave him far more insight into how the devices worked. He filed requests for information on the devices under the Freedom of Information Act, but departments locked up, citing confidential methods. He studied The Fugitive Game, a 400-page study of the Mitnick case, scouring for clues on exactly how police had tracked the rogue hacker. There was no public evidence of the device at the federal level, no documents or statements indicating it was in use. He turned his attention to local departments, hoping they would be less careful. When his library time was up, he would take the documents back, poring over them in his cell. Over more than two years, he built a file that sprawled to hundreds of pages, including every last trace of the Stingray he could find.

Rigmaiden needed allies, so he sent his file to half a dozen different privacy organizations, but never got back more than a form letter. Not only was Rigmaiden a self-represented prisoner chasing a mythical surveillance device, but he had filed hundreds of motions — these were sure signs of a crank. A normal person would take the plea deal and resign himself to his sentence. Rigmaiden’s phonebook-sized file was testament to how unusual he really was.