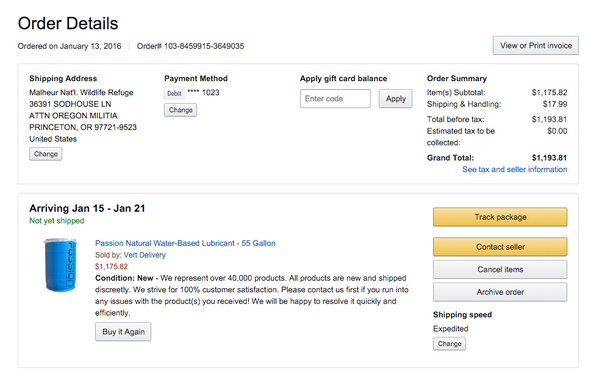 In 2009, Indian women sent pink underwear to Shri Ram Sene, a right-wing, conservative Hindu organization that had promoted street-violence against women who were perceived as "immodest."

America has its own right-wing ultraconservative terrorists, the domestic terrorists whose fairy-tale history demands that they take up arms and seize federal land to demand the right of cattle barons to receive a public subsidy in the form of grazing rights.

Those guys need a loosening up, for sure.

Enter Max "Cards Against Humanity" Temkin, who mailed them a 55-gallon drum of personal lube -- one of Amazon's all-time gag items.

Update: From the comments, Brainspore wins the Internet: "Just because they don't respect SOME laws doesn't mean that they're going to dump a 55-gallon drum of lubricant into a nature reserve.