Company that pampers rich people at Burning Man won't give up 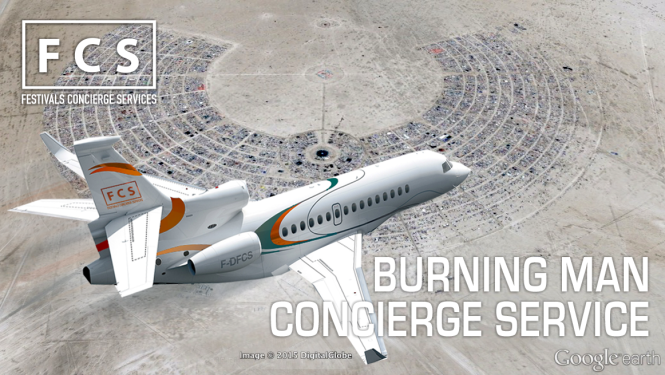 "Festival Concierge Service" is a European company that advertises a pampered, all-inclusive Burning Man trip to wealthy people -- a major no-no at the festival. Despite being blacklisted, ejected and legally threatened by the Burning Man organization, they refuse to give up.

Shortly thereafter, the company was back, advertising the same service, claiming it had a relationship with Outside Services (the organization that coordinates for deliveries at the festival) and Air Carrier Services (who manage passenger and freight flights into the festival's airstrip). The Burning Man organization told its outside/air carrier service suppliers that if they would be banned if they were caught doing business with Festival Concierge Service.

Then, at last summer's event, FCS CEO Antoine Sepulchre and FCS employee Florence Defort were caught providing commercial services at the festival and were ejected and cited by the Bureau of Land Management.

Now, FCS is at it again, advertising a "turnkey experience" for the wealthy at Burning Man, stating that the company "collaborates with Burning Man Outside Services Program selected partners." In an email to Burning Man theme camp organizers, the Burning Man Organization repeated that this isn't true, and that anyone caught helping FCS would be booted. In addition, they ask people to be on the lookout for signs that FCS is trying to sneak in:

If you, or your OSS provider, are contacted by any representative of
FCS or anyone identifying themselves as an FCS client, we ask that you
please let us know. In keeping with Burning Man's Ten Principles, we
do not want theme camps or mutant vehicle owners to support concierge
camping or travel package services. That includes hosting FCS clients
or providing services like access to mutant vehicles. Collaborating
with FCS could certainly compromise your good standing with Burning
Man, including access to directed group tickets, placement, and mutant
vehicle licensing.