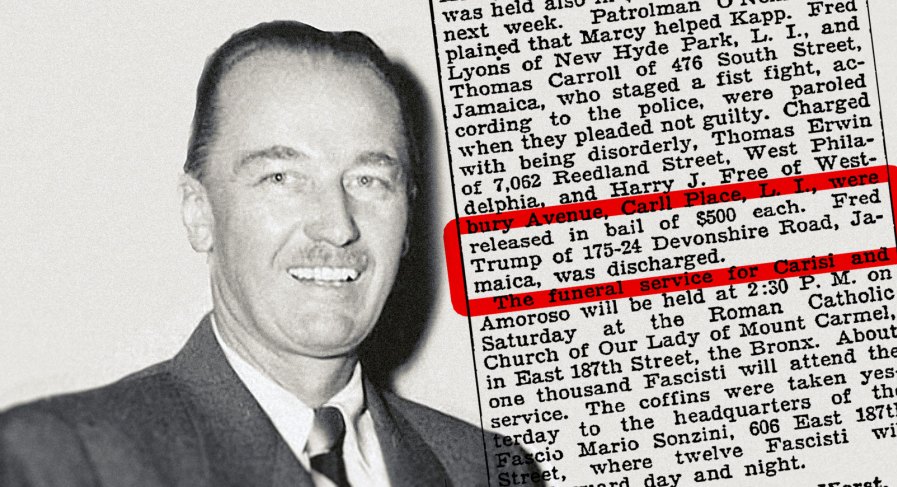 Woodie Guthrie lived in one of Fred Trump's building for two years, starting in 1950, and was so taken with the KKK-affiliated landlord, who bribed federal officials in exchange for government handouts that he used to build his income property.

Fred Trump maintained a racist "color bar" -- a whites-only policy -- for his property, something that particularly galled Guthrie. Guthrie wrote poems and journal entries expressing his loathing for the elder Trump. Will Kaufman -- Professor of American Literature and Culture at University of Central Lancashire -- unearthed the writing in the Woody Guthrie archives:

For Guthrie, Fred Trump came to personify all the viciousness of the racist codes that continued to put decent housing – both public and private – out of reach for so many of his fellow citizens:

I suppose
Old Man Trump knows
Just how much
Racial Hate
he stirred up
In the bloodpot of human hearts
When he drawed
That color line
Here at his
Eighteen hundred family project ....

And as if to leave no doubt over Trump’s personal culpability in perpetuating black Americans’ status as internal refugees – strangers in their own strange land – Guthrie reworked his signature Dust Bowl ballad “I Ain’t Got No Home” into a blistering broadside against his landlord:

Beach Haven ain’t my home!
I just cain’t pay this rent!
My money’s down the drain!
And my soul is badly bent!
Beach Haven looks like heaven
Where no black ones come to roam!

No, no, no! Old Man Trump!
Old Beach Haven ain’t my home!