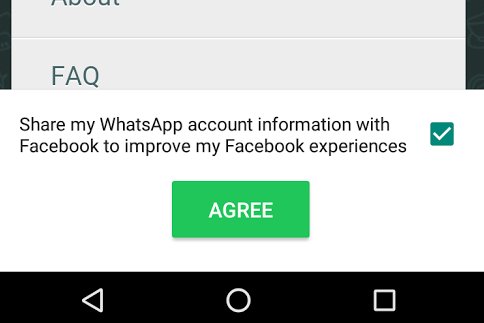 This week, Whatsapp -- an instant messaging company that was founded on the principle of charging $1/year and preserving your privacy in exchange, but which sold to Facebook in 2014 for $19B -- sent users a message that their accounts would be free forevermore -- at the same time as the app quietly introduced a tickbox (optional, for now) to share your data with Facebook "to improve your Facebook experience."

The equivalence is stark and revealing, though not surprising. Facebook is presently valued at $278.6B, with 1.23B monthly active users, meaning that the company is managing to reap a total of a paltry $226 of lifetime expected earnings from knowing all of your intimate secrets, being privy to all of your personal communications, knowing your whole browsing history, and having a graph of your personal relations with everyone in your life. The deal you make when you sign up with Facebook sells something very precious very cheaply indeed.

At that rate, $1/year for your Whatsapp data is probably an overpayment.

The discovery of the Whatsapp/Facebook integration was made by Javier Santos, who posted screenshots of the new options.