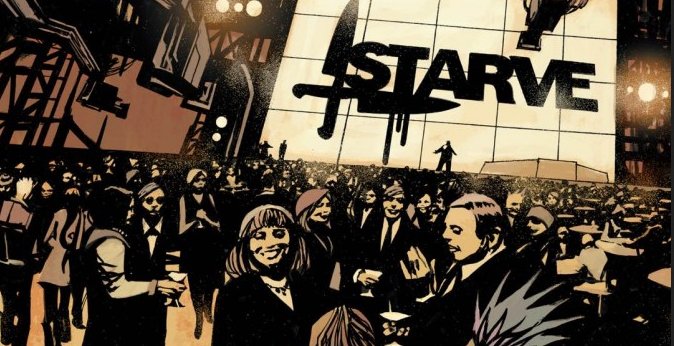 The launch of Starve, the new comic from Brian Wood, creator of the landmark DMZ and artists Danijel Žeželj and Dave Stewart, was widely celebrated as a major new comic that started as strong as Warren Ellis's Transmetropolitan.

Starve is the story of Gavin Cruikshank, a world-famous chef who went into exile when the TV network that employed him imploded, taking his personal life with it. After a decade of living in the slums of Asia, fighting and drinking and drugging, he is dragged back to New York with the news that his old celebrity cooking show, Starve, is back with a newly rebooted network, and has become the world's most popular TV show. It got there by switching its focus to the preparation of luxury meals for the increasingly terrified, increasingly hostile One Percent, whose feet are getting wetted by the rising seas every bit as much as the dehumanized teeming masses below them.

Back in New York, Gavin must confront his ex-wife's hatred -- justifiable, perhaps, because of her anger at his coming out as gay decades into their marriage, then abandoning her and their daughter. That daughter is nearly 18, and despite (or maybe because of) her father's long absence, she defies her mother and grows close to him.

Gavin is now a contestant on the rebooted Starve, hosted by his old archrival, who is determined to destroy him with the show's challenges.

Like DMZ, Starve turns on the complicated relationships between its characters, their motives neither pure nor base, their passions undeniable. Cruikshank is as likable and as fucked-up as Spider Jerusalem, and Wood's economical storytelling is offset by the angular, almost violent lines of Žeželj and Stewart, who give us a dark and dissolute New York that's one part Blade Runner, one part Delicatessen.

It's a story that's got as much to say about parental love as it does about streetfighting, that runs from boardrooms to kitchens to TV studios, and that is full of literally mouthwatering depictions of spectacular meals. The first issue of Starve hinted at a story that would join the annals of comics history, and this first collection marks a spectacular milestone in that story that lives up to all that promise -- and promises more.

Preview issue one of Starve