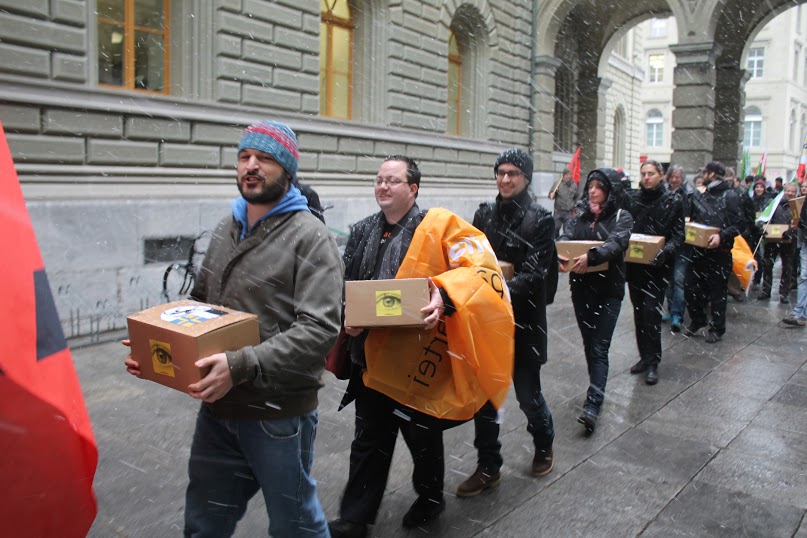 Protonmail is a Swiss pro-privacy email provider that offers end-to-end encyption to its customers. When the Swiss government proposed the Nachrichtendienstgesetzt -- a bill to create a "mini NSA" with the power to effect warrantless mass surveillance, including hacking residents' computers -- the company called on its users and supporters to petition the government for a referendum on the law.

The Swiss Constitution allows the electorate to force a national referendum on proposed legislation by gathering 50,000 signatures. Protonmail worked with CCC Switzerland, Digitale Gesellschaft Switzerland, and the Pirate and Green parties to collect more than 70,000 signatures. The law can't take effect until and unless the government holds and wins a referendum.

It's a major event on the world's political stage. As the UK, US, France and other countries contemplate laws that expand state surveillance and hacking, ban crypto, and reduce accountability, the Swiss people -- very private to begin with -- are being directly asked for their views on the subject.

The new law is the first of two surveillance laws that have been circulating through the Swiss Parliament. The NDG law was fully passed in September, but can’t take full effect until after the referendum vote in June. The NDG would “create a mini NSA in Switzerland,” Yen wrote — allowing Swiss intelligence to spy without getting court approval. It would authorize increased use of “Trojans”, or remote hacking tactics to investigate suspects’ computers, including remotely turning on Webcams and taking photos, as well as hacking abroad to protect Swiss infrastructure. It would legalize ISMI catchers, or Stingrays, which sweep up data about cellphones in the area.

The second law, known as the “BUDF”, might come up for a vote in the Parliament’s spring session—but may be revised or delayed. The BUDF would expand the government’s ability to retain data for longer, including communications and metadata, as well as deputize private companies to help spy on it users, or face a fine. “What I have heard from insiders is that they will reduce its scope now that they know we have the numbers to also force a vote on that law,” Yen wrote in an email to The Intercept.