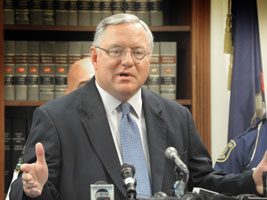 
The bill reads, in part: "A person who commits the abominable and detestable crime against nature either with mankind or with any animal is guilty of a felony" -- that felony is punishable by 15 years in prison.

Jones says he kept the language intact because he thought that his fellow lawmakers and his constituents would have blocked the animal rights reforms if the bill addressed the rights of humans.

The bill has passed the Michigan senate.

"The minute I cross that line and I start talking about the other stuff, I won’t even get another hearing. It’ll be done," Jones (photo, above) said. "Nobody wants to touch it. I would rather not even bring up the topic, because I know what would happen. You’d get both sides screaming and you end up with a big fight that’s not needed because it’s unconstitutional."


Jones added that he believes the only way to repeal the sodomy ban would be a bill striking all unconstitutional laws from the state's books.

"But if you focus on it, people just go ballistic," he said. "If we could put a bill in that said anything that’s unconstitutional be removed from the legal books of Michigan, that’s probably something I could vote for, but am I going to mess up this dog bill that everybody wants? No."