Ted Nugent is an anti-semitic asshole 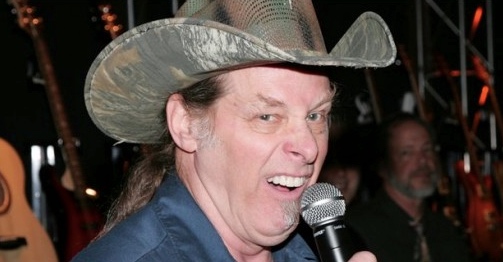 Has-been rock musician Ted Nugent made shockingly anti-semitic and idiotic posts to Facebook this week, spurring many pro-gun advocates to call for his removal from the board of the National Rifle Association.

Nugent, an outspoken Second Amendment advocate, posted a photo on Facebook earlier this week calling Sen. Dianne Feinstein (D-Calif.), “Jew York City Mayor Mikey Bloomberg,” former senator Carl Levin (D-Mich.) and Harvard law professor Alan Dershowitz, among many others, “punks” who would “deny us the basic human right to self defense and to keep and bear arms while many of them have paid hired armed security.”


The Israeli flag appears over or next to each of the 12 faces in the photo, which is the same one that has been shared many times in white suprema­cist cir­cles, according to the Anti-Defamation League....

Nugent later posted a photo of Nazis rounding up Jews during the Holocaust and described gun-control advocates as “soulless sheep to slaughter.”