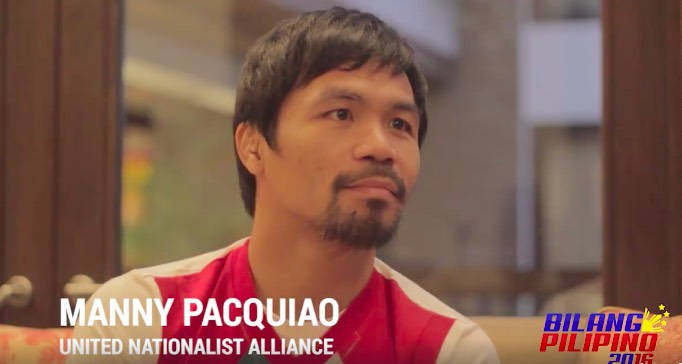 The internet was very angry at Manny Pacquiao today.

The world champion boxer who is now pursuing political office as an Evangelical Christian candidate in the Philippines recently called people in homosexual relationships “worse than animals.” He made the remark during an interview with a TV broadcaster in the Phillippines, posted on the channel's website. After a bunch of LGBTQ people and the non-homophobes who love them pointed out what a dick move this was, he apologized in the shit-eating way that only someone running for office as a queer-hatin' bible thumper can when they're not actually sorry at all for saying gays are worse than animals.

Manny Pacquiao is still a total dick. Remember this.

I rather obey the Lord's command than obeying the desires of the flesh. Im not condemning anyone, but I'm just telling the truth of what the Bible says. The truth from the Bible is what changed me from my old ways. 1 Corinthians 6:9 "[9] Or do you not know that wrongdoers will not inherit the kingdom of God? Do not be deceived: Neither the sexually immoral nor idolaters nor adulterers nor men who have sex with men." God Bless everyone i love you all. @johnnybantilan @david.sisson @jinkeepacquiao

From the Guardian's coverage:

Responding to the controversy via Instagram, Pacquiao initially posted an image of himself with his wife, quoting the Bible and writing: “I rather obey the Lord’s command than obeying the desire of the flesh. I’m not condemning anyone, but I’m just telling the truth of what the Bible says.”

Later, though, he added an apology, saying: “I’m sorry for hurting people by comparing homosexuals to animals. Please forgive me for those I’ve hurt. I still stand on my belief that I’m against same sex marriage because of what the Bible says, but I’m not condemning LGBT. I love you all with the love of the Lord. God bless you all and I’m praying for you.”

Supreme Court Justice Antonin Scalia was found dead in his room at a luxury hunting ranch in Texas a few days ago, and conspiracy theories that he was assassinated are flying all over. Who among the current round of presidential candidates is doing the most to fan the flames of crazy? You guessed it, Donald […]

How does TMZ get the videos and photos that celebrities want to hide? Because like any good intelligence operation, their spies aren’t above paying for intelligence. TMZ pays its sources good money for tips on the dirty-doings of the rich and famous, and operates in Hollywood with the reach and stealth of an effective surveillance […]

Former New York governor Eliot Spitzer, who resigned in disgrace after being outed as “Client 9” in a now legendary sex worker scandal, is said to have choked a woman at The Plaza hotel in New York City. The New York Post broke the story, citing local law enforcement sources. After his fall from grace, […]