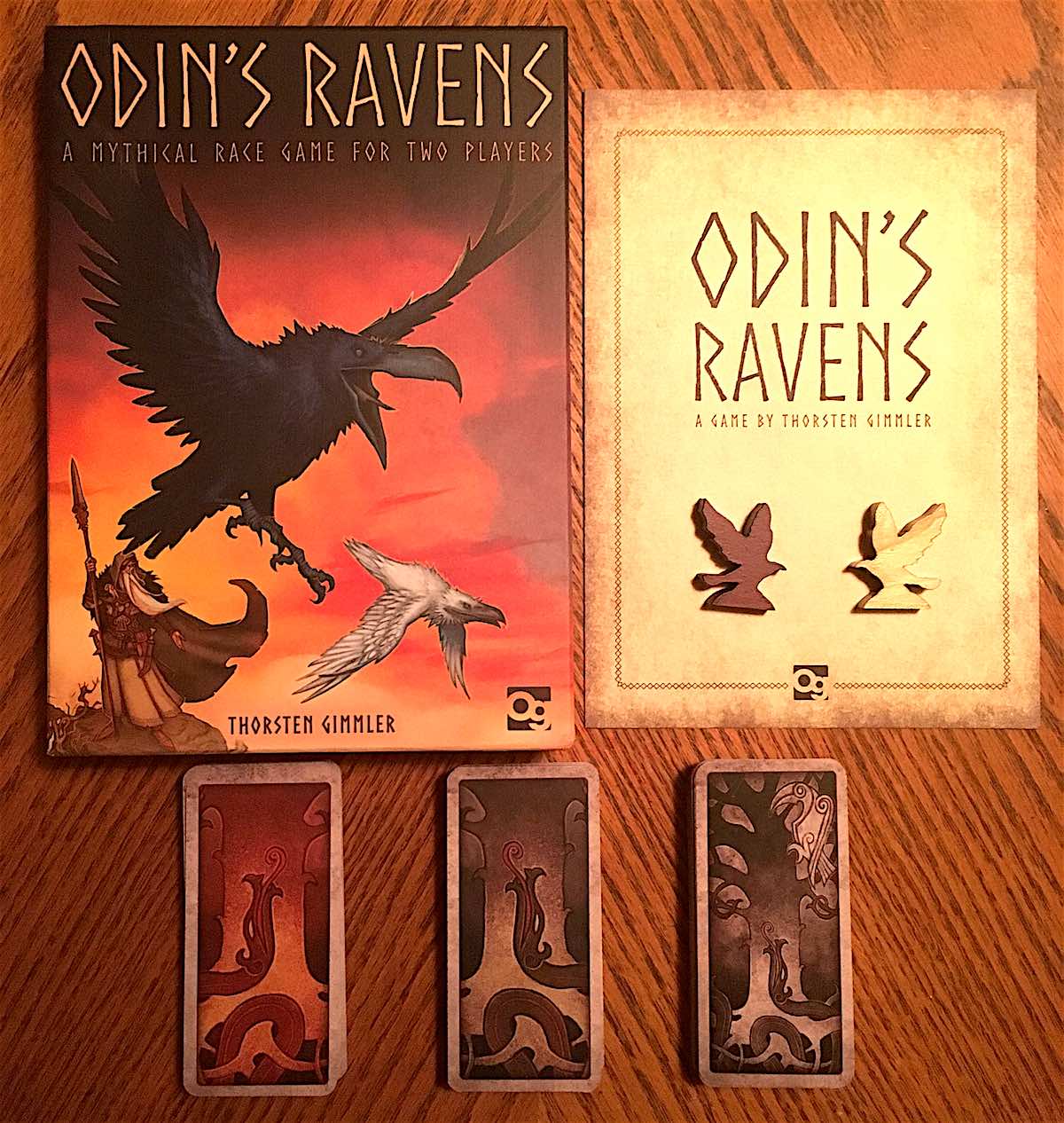 Odin’s Ravens is a gorgeous, quick, and easy-to-play card game for two players. The story behind the race at the heart of the game is simple: The Norse god Odin has two ravens, Huginn and Muninn. Every morning, he sends them out to circle the world and report back on what they see. The ravens have turned the daily ritual into a competition, as they race around Midgard to see who can return to Odin first. To win, neither of them are beyond calling on Loki, the trickster god, to thwart the journey of the other.

I absolutely love the production on this new edition of Odin’s Ravens, from the sturdy, very tome-like clamshell box, to the vivid and handsomely designed cards, to the two wooden ravens that serve as the playing pieces. Since the game itself is rather simple, it was smart of Osprey to up the aesthetic impact of the game. These two elements, ease-of-play and pleasing components, coupled with the mythological gloss of the backstory all combine to create a very satisfying gaming experience.

Odin’s Ravens is played out on a racing track of land cards. Each card depicts two different land types (mountains, forests, plains, desert, frozen northlands). Each raven starts on one of the two land tracks depicted on the two-part cards and races through all of the domains to arrive back at the beginning. Players have a deck of cards depicting the five different domains and must show a matching card from their hand that depicts the next land type they want to move onto. If the active player does not have a matching card, s/he can play two cards of the same land type instead and still move forward. If the player totally gets stuck, she can spend a Loki card (if she has one) from her hand. Each Loki card shows two available options for monkeying with the land track to make it work for you or make it harder for that clearly inferior other raven to make it back to Odin. The first raven who flies over all of the land and returns to Odin’s arm first is clearly the superior raven.

Osprey Publishing has recently been venturing into the realm of board, card, and role-playing games with some very cool and somewhat offbeat offerings. This edition of Odin’s Revenge is a refinement of a game that’s been around since 2002. Besides redoing all of the art and upping the ante on the production values, they’ve also streamlined the rules to make the game faster, less cumbersome, and I suspect, to widen its appeal. This is the perfect kind of game to play with the family, for a quickie, or to play something fun with people who don’t normally game.