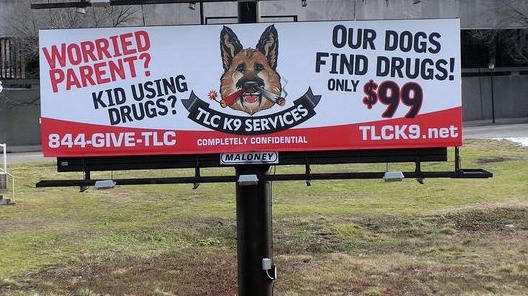 The Last Chance K9 Service in New Albany, Indiana is just one of several companies that sells the services of drug detection dogs to parents who think their kids are hiding drugs in their room. A visit costs $99. Since opening in September of last year, owner Michel Davis says his K9 teams have searched more than 50 homes and have a 90 percent hit rate. For example, one teen had stashed his weed in a cereal box and another hid her pot pipe in an Altoids can. The dogs weren't fooled. I'm sure these cases end with big, teary, loving family hugs and the kids say nope to dope from then on. From the Courier-Journal:

Davis, who has tactical training in the detection of drugs, firearms and bombs, said the majority of his work has been focused on bigger contracts, including searches of businesses and other private contracts he said he's not at liberty to discuss.


But he said he's motivated to aid parents, adding a personal touch and pep talk because of his own experiences. He said had a tough upbringing in Louisville, experimented with marijuana and saw some of his friends progress to harder drugs. He was inspired to fight addiction in his own way after an addict seeking money in 2005 attacked his pregnant fiancee, causing her to lose the baby.


"We want to take drugs off the streets," Davis said of his team, which includes other dog handlers with military backgrounds.


"What we do is help the family fix the issue," he said. "We're not the police."