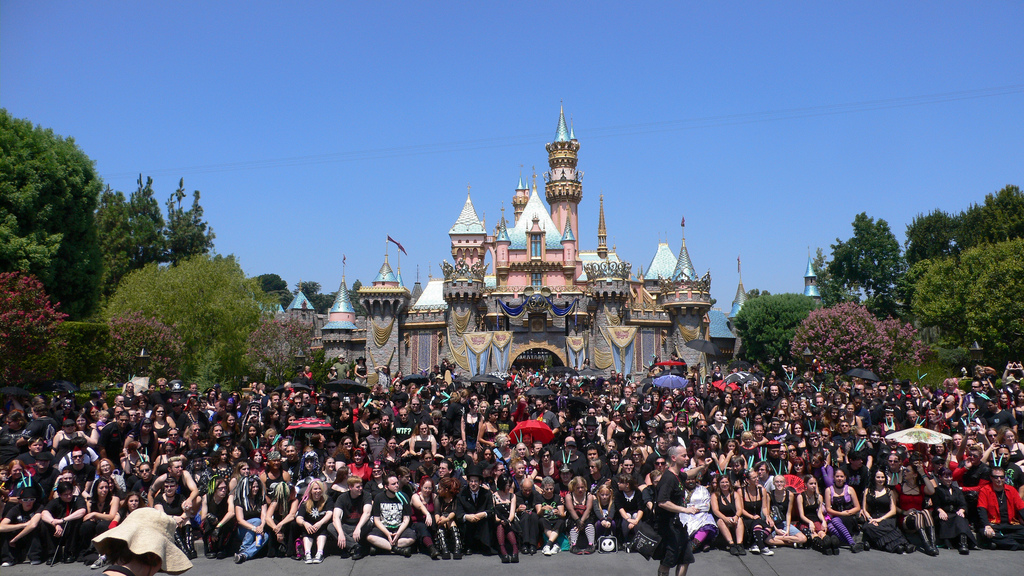 Two key decisions in the history of Disney parks have put them in an eternal war to balance capacity and pricing: deciding not to close the parks to new entrants on crowded days, and doing away with ticket books for rides.

Both were rational decisions. With Knott's Berry Farm and other competing attractions offering all-you-can-ride entry passes, Disney's antiquated A-E ticket books felt like a ripoff, and the fact that they were a not-so-subtle way of manipulating you into riding rides you'd otherwise pass up ("We gotta do something with these A tickets, oh look, there's the Omnibus!") became so obvious that no one could miss it anymore.

Then there was the business of shutting the doors once capacity was reached. The parks still do this, but the definition of "capacity" has slid a lot further along the scale. I remember driving up to Walt Disney World's gates around Christmas 1977 and being sent back because there was no more room. It happened again in the 2000s, but "no more room" then meant much more crowding than I'd ever seen in a Disney park (we were able to bypass it because we were staying in an onsite hotel).

It's impossible to say which is worse: flying halfway around the world to visit a Disney park, only to be sent away; or to be admitted, only to find yourself in a kind of rush-hour Tokyo subway train with characters and popcorn.

As the popularity of Disney parks has increased, the company has found itself in a Red Queen's Race with its crowds. Its favorite tactic is building new showstopper rides -- like the Cars Land area in California Adventure -- to drain off some of the crowds, but all that does is bring in lots of new crowds who want to see the new ride. The year that Cars Land opened, the park turned into a kind of horror-show in which lines snaked all around it, filled with miserable children and fuming parents who were waiting, and waiting, and waiting, and waiting.

Other innovations made crowding worse, too: before Fastpasses, a substantial fraction of the attendees at any given moment were likely to be standing in line in an air-conditioned show building. Now they're wandering around in the heat, looking for amusements.

In Disneyland, the sheer volume of annual passholders has added more fuel to the fire. Even doubling the price of the annual passes hasn't seemed to make much of a difference -- and now they're about to go from $750 or so to over $1000/year for the premium pass, as Disney does its damndest to cool down the ardor of its biggest fans.

It's all about to get worse, too: the Star Wars lands being built in both Florida and California will send crowds into the stratosphere. So Disney is marking out some days as "premium" days and charging extra to attend, while other days will be "off-peak" and discounted. I predict that this will have little effect on the problem, alas. Partly that's due to the American workplace's stinginess with days off -- regardless of the price, there are very few days when American workers can get out of their jobs. Combine that with the US school system's increasingly strict policies on absences and you end up with certain days being the only ones when many visitors can attend.

Raising prices has a paradoxical effect: people who pay $150 or more for a day's admission are going to want to get their money's worth, meaning that they show up early and stay late. Those people have a terrible time, because it's impossible to have a great day at Disneyland that starts at 7AM and ends at midnight. If they could be convinced to go home at dinner time, you could add 20-30% to the parks’ capacity.

Variable pricing is going to make this effect more pronounced. Worse, it's going to start a lot of people's Disney days with a huge, difficult to understand fight in which they'll feel like they're being ripped off. The start-of-day experience at Disneyland is already the worst it's ever been: fight traffic to get to Disneyland; fight traffic in the parking lot, queue up for the escalator, queue up for the tram, get searched, queue up for tickets, queue up for admission (behind people who've printed out tickets and need to go through a lengthy, balky process to convert those to passes at the turnstyles) -- it's half a dozen queues before you even get inside the park proper.

It's not clear to me what they could do to make this all better. It's a paradox: the more popular the parks get, the worse the experience gets, but the crowds still grow. Eventually, perhaps, it will reach a breaking point. In the meantime, the problem itself looks like an opportunity for anyone who wants to build a park designed from the ground up to manage the whole crowd issue more gracefully.

At the company’s Disneyland and California Adventure parks in Anaheim, “regular” single-day adult ticket prices, which will be offered for about half of the year, will climb to $105 per day from $99 currently. “Peak” days, typically holiday periods and July weekends, will cost $119. The “value” ticket will fall to $95 from $99 currently. Value periods, mostly weekdays when school is in session, will account for 83 days this year.

Adult tickets for the Magic Kingdom, Disney’s flagship park in Orlando, will rise to $124 a day for peak periods, up from $105 presently. Tickets for the Epcot, Hollywood Studios and Animal Kingdom resorts will rise to $114 on peak days, from $97 currently. Prices aren’t rising at the four Florida parks during the value days.

Multiday passes will get a typical increase, while season passes won’t change since they were increased in October, Disney said.

“The demand for our theme parks continues to grow, particularly during peak periods,” the company said in a statement. “In addition to expanding our parks, we are adopting seasonal pricing on our one-day ticket to help better spread visitation throughout the year. Multi-day tickets, annual passes and visiting during non-peak periods also provide our guests with options and savings.”