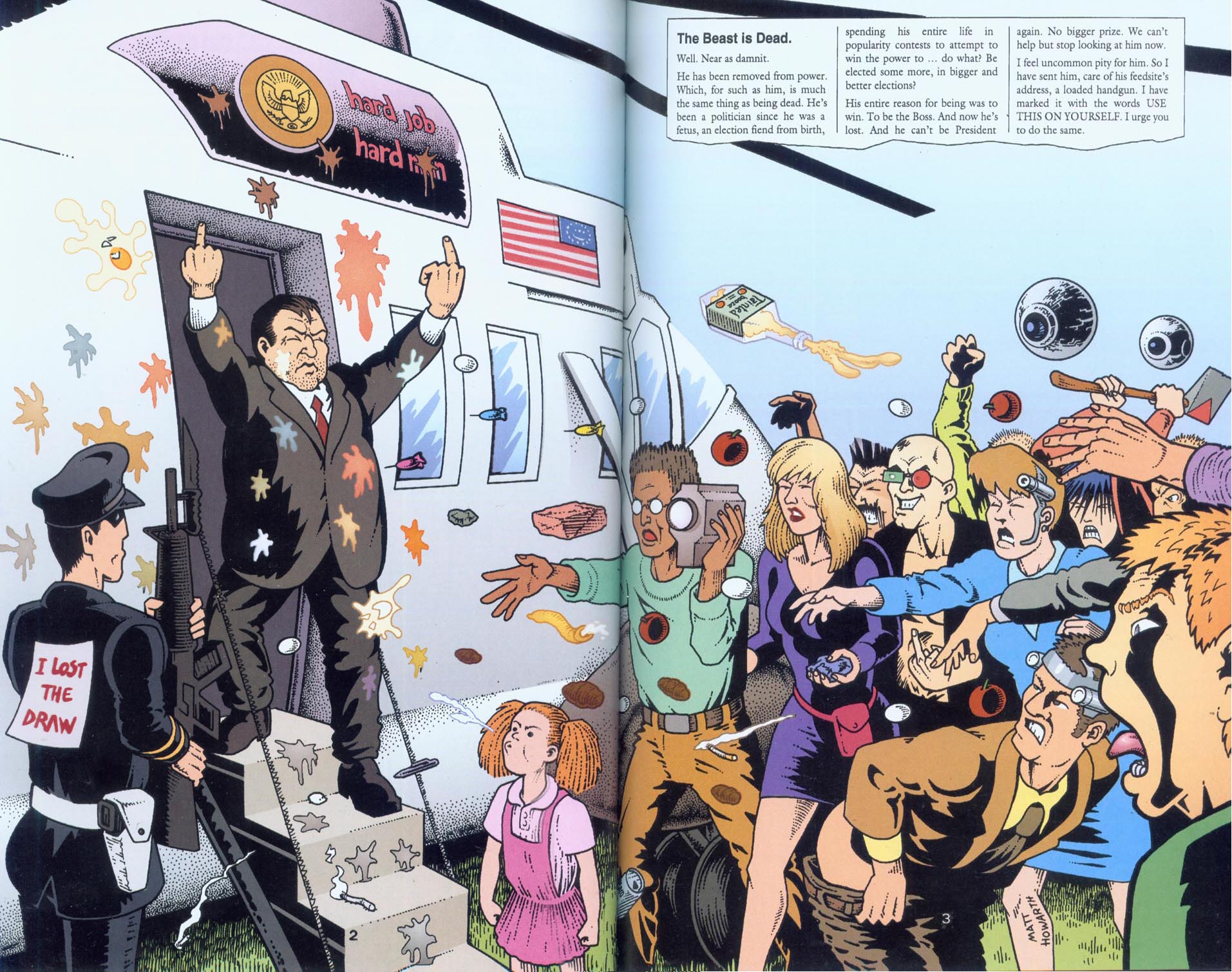 Warren Ellis and Darick Robertson's Transmetropolitan is nearly 20 years old, and the science fiction story of a journalist who wages truth-war on scumbag politicians 200 years from now could not be more relevant than it is today.

Ellis's storylines expose the sleazy underworkings of corrupt establishment politicians and the populist thugs who challenge them. The sixty-issue run is collected in ten volumes, though, criminally, they do not yet exist in a single omnibus.

Ellis was writing about the Blair years in the UK, exaggerating them for dramatic effect. But the years since have only magnified the Blair effect, tossing out candidates like Trump and Romney and Clinton II and Farage and the whole menagerie of EU xenophobe/authoritarian strongmen. Damien Walter plumbs the parallels between the political satire of the 1990s and the real-world politics of the 2010s.

I like to think of Matt Taibbi as the real-world analog to Spider Jerusalem.

Jerusalem is pitched against two major political opponents through Transmetropolitan's 60-issue run. The Beast is the sitting president as the narrative opens, a physically imposing bully and "strongman" leader who appeals to the authoritarian streak in those he rules over. The Beast represents the very worst aspects of modern political life – and embodies all the horrifying ignorance visible in Donald Trump.

He's not the only enemy awaiting Spider Jerusalem: Gary Callahan, aka The Smiler (as Jerusalem calls him) is clearly modelled on Tony Blair during his rise to power. Callahan is at first presented as a liberal alternative to the Beast, but piece by piece Jerusalem's investigations reveal a far more sinister character who will stop at nothing to gain power while keeping up a perfect public image.

The Smiler is all of our worst fears about our political elite; even when they represent policies we disagree with, we hope they at least operate with conviction. But when we look at the state of political funding – particularly in the US, with the vast sums paid by banks and corporations to political leaders – that can seem hard to believe. There are politicians, like Bernie Sanders, who appeal because their policies feel born from genuine passion (however unrealistic), while others, such as Hillary Clinton, appear to coverits absence behind relentless smiles.