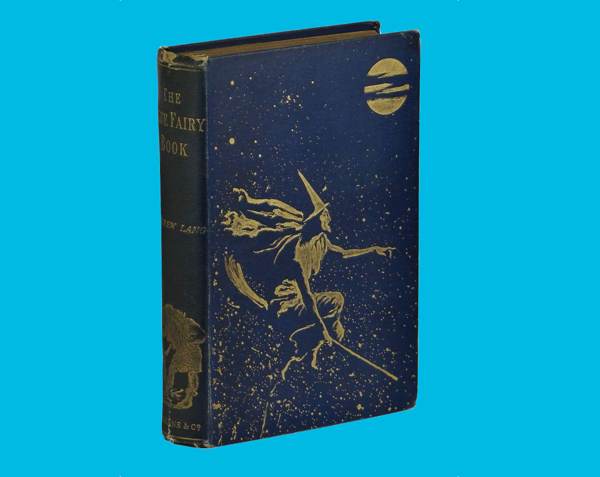 A first edition of Andrew Lang's Blue Fairy Book (1889) will run you about $(removed) for a copy in good condition. Amazon has a free Kindle edition.

Andrew Lang (1844-1912) was a Scottish poet, novelist and literary critic, but his enduring legacy is not his prodigious writing. Lang is best remembered for his contribution to folklore and storytelling thanks to his 12-volume ‘Fairy Books’ collection.

Many people in the late Victorian era considered traditional fairytales to be unfit for children because of their brutal and violent themes, so English collections of fairytales were rare during this period. Lang, on the other hand, grew up reading classic fairy tales during his childhood in the rural Scottish Borders and he believed that the next generation of children should not be subjected to the dreamy, gentle, flower-orientated fairy tales that were popular at the time.

The first of his collections was the Blue Fairy Book (1889), for which Lang pulled together tales from the Brothers Grimm, Madame d’Aulnoy, the Arabian Nights, and many other sources. The first edition had 5,000 copies, which sold for six shillings each. The book did reasonably well and led to the release of the Red (1890) and Green Fairy Books (1892), in the preface of the latter Lang predicted that this third volume would be his last. However, Lang underestimated the appeal of these tales culled from all corners of the earth including Africa, Norway, North America and China. For many of these stories, it was the first time they had been published in English and their popularity lead to a further nine volumes over the following 18 years.

In terms of collectability, the scarce first editions of the Blue Fairy Books are the ones that really count. Subsequent editions were produced in large quantities.

Cinderella with glass arm instead of glass slipper

Glass arms are so much more magical than glass slippers. A woman whose daughter was born with one arm asked professional costume designer and cosplayer Mandy Pursley for a bit of photographic inspiration. Pursley, who also has one arm, sent photos shot her modeling a fantastic Cinderella costume she made that is leveled way up […]

More than a century before the Disneyfication of Snow White, German folklorists the Brothers Grimm collected the fairy tale in their anthology Nursery and Household Tales. But their version, and earlier tellings including one titled “The Young Slave” from the 17th century, was not quite the Snow White that in 1937 became Disney’s first animated […]

Colin Johnson is an overnight legend. Earlier… This exchange has all the ingredients of a classic fairy tale — note that it’s not really Ladbrokes replying to him, but a cunning trickster. Watch for many more like it in the coming months and years as England generates a new folklore.