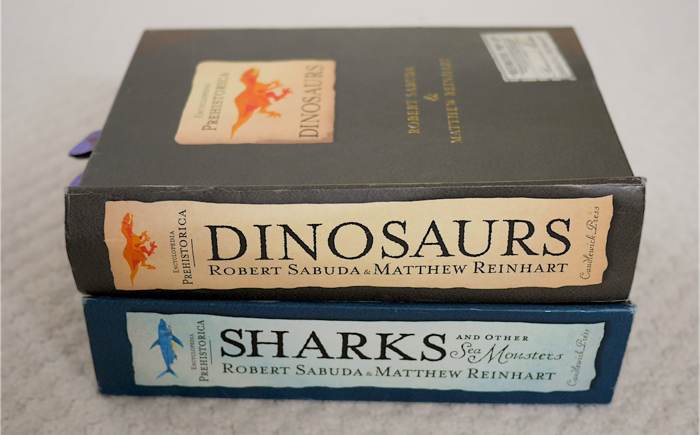 There are only five “pages” in each of these books despite their 3-inch thickness. That is because each page is stuffed with layers and layers of ingenious interacting bits of printed paper, which magically assemble themselves into an alternate reality when each page is opened. Yes, it is a pop-up book, but a pop-up raised to an exponential level. A pop-up on steroids, or acid. Pop-up as extreme sport. The engineering is astounding. As a page is opened a 3D apparition appears, often with its own narrative, first one part and then another. The resulting paper sculpture is the story made real. The textual story is minimal; all the action is in the structures. Kids love to see how they work. The only downside to these books that belong on paper is not letting children paws tear the mechanics. These two books feature all kinds of pre-historic dinosaurs, and sharks of all types. But the artist behind them, Robert Sabuda, has half a dozen other books with the same kind of extreme pop-up-ness.

by Robert Sabuda and Matthew Reinhart

by Robert Sabuda and Matthew Reinhart