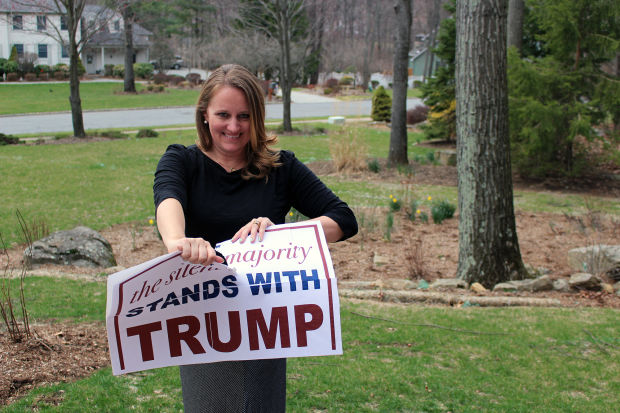 Stephanie Cegielski was in the Trump campaign from the beginning, first serving as communications director of the Make America Great Again Super PAC, then shutting down the PAC "in order to position him as the quintessential non-politician."

Cegielski served as Trump's communications director through the campaign, which, she says, no one intended to be a serious run at the White House -- not even Trump. Rather, the goal was to take Trump to double-digit poll numbers and shake up the establishment, because Trump didn't want to be president, he "just wants to be able to say that he could have run the White House."

As Trump's campaign success exceeded beyond everyone's wildest speculation, Cegielski watched in horror as Trump talked himself into believing that he had what it took to run the nation. Even as this was happening, Cegielski was coming to appreciate that the campaign's internal slogan, "Let Trump Be Trump," was hiding the real truth: "Let Trump Help Trump."

She discovered (later than she had any excuse to, really), that Trump was a self-serving monster who'd throw his own mother under the bus to secure even the smallest advantage for himself. Trump is a walking Dunning-Kruger effect, whose lack of self-awareness about his own limitations results in gaffe after gaffe. Combine this fatal, unknowing ignorance with his lack of compunction about harming others to help himself and you get a campaign where Trump's most loyal followers are, one after another, sacrificed by Trump himself, who scapegoats them to make up for his shortcomings.

Cegielski's realization that this would be the motif of a Trump presidency, with America itself standing in for the hapless interns that Trump has victimized on his race to the top, led her to "defect" and to warn Trump's supporters that they're creating a monster.

I fear that Cegielski's revelations about Trump's self-absorption and indifference to the welfare of others has been obvious to everyone who wasn't a Trump supporter since day one, and that her note will do no good in convincing the faithful who've ignored so many other warnings to date.

I no longer felt that he was the leader the country was looking for, and I found myself longing — aching, really — for policy substance that went beyond building a wall and making Mexico pay for it. What were once bold — although controversial — statements now seemed to be attempts to please the crowds, not direction to lead this country to a better place. I began to realize his arrogance and isolation had taken over and were now controlling his message.

And here's what he tapped into: the unprecedented, unbelievable anger.

Because we are all angry — and we all have a right to be. But Trump is not our champion. He would stab any one of his supporters in the back if it earned him a cent more in his pocket.

Unfortunately, the more vitriolic Trump has become, the more the people responded to him. That drove him to push the boundaries further and further.

I also started seeing a trend of incompetence and deniability.