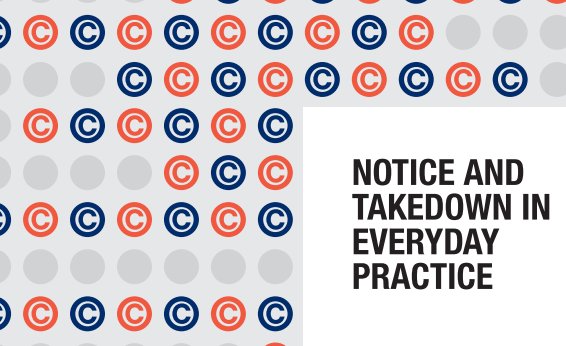 Three of America's sharpest copyright scholars have released a landmark study of the impact of copyright takedowns on free expression in America: Notice and Takedown in Everyday Practice, by Jennifer Urban (UC Berkeley), Joe Karaganis (Columbia), and Brianna L. Schofiel (UC Berkeley) uses detailed surveys and interviews and a random sample from over 100,000,000 takedown notices to analyze the proportion of fraudulent, malformed or otherwise incorrect acts of censorship undertaken in copyright's name, using the Digital Millennium Copyright Act's takedown procedure.

The DMCA is nearly 20 years old, and even before it was passed into law, virtually everyone who was paying attention said that creating a system that allows anything online to be censored through copyright infringement accusations, without due process or even penalties for getting it wrong, would get us into trouble. Now the evidence is in, and it couldn't be more damning.

Our recommendations for statutory reform focus on making it more difficult for senders to
issue questionable notices without risk, and strengthening the ability of targets to respond.
They require senders to declare under penalty of perjury that their substantive claims in
a takedown notice are accurate, remove the mandatory ten-day waiting period before
material goes back up, lower the standard for targets to recover damages from senders who
make bogus claims, and raise the penalty for doing so. The recommendations also support
reforming the current statutory damages regime to reduce OSPs’ fears of outsized liability
and current bias toward takedown. The recommendations further suggest requiring notice
and counter notice senders to submit notices to a centralized repository, where they can be
searched and analyzed.

We strongly recommend avoiding statutory changes that would expand automated practices
without much better control against mistake and abuse, or raise the cost of compliance for the
vast majority of DMCA Classic OSPs. DMCA Plus measures should remain entirely voluntary.

Beyond statutory reform, knowledge-sharing and best practices can fill gaps and improve
operation. Our qualitative interviews identified a number of such practices. Accordingly, our
recommendations for rightsholders emphasize both human and machine methods to help
limit mistakes and misuse. We encourage rightsholders to work with OSPs to streamline
processing and limit overbroad removal.

censorship / Copyfight / dmca / scholarship / web theory / who could have imagined?