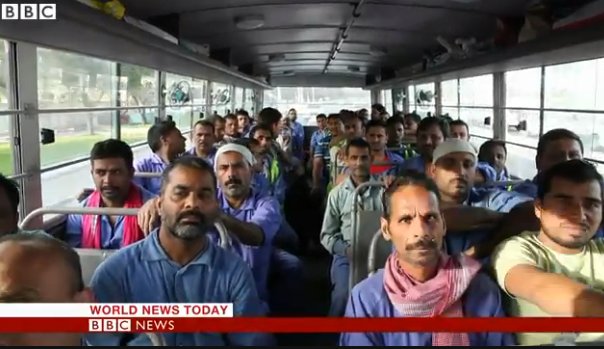 Qatar, one of the worst places in the world to be a worker (even the flight attendants experience human rights abuses), was picked to host the 2022 football world cup by the famously corrupt FIFA organization, despite the physical danger to spectators (and athletes!) from the incredible temperatures.

Now Amnesty International has come forward with documentation of widespread forced labor practices on the site of the new stadium. Workers from Nepal, India, and other parts of south Asia were lured to Qatar by deceptive labor brokers who charged them steep "fees" and seized their passports, saying they will not be returned until their "debts" are paid off. These workers are held prisoner in Qatar -- Nepalese workers were denied exit visas to visit their families after the 2015 quake -- and worked under brutal, inhumane conditions.

The number of workers on the project is expected to increase tenfold.

The World Cup is sponsored by some of the world's largest corporations: Adidas, Coca Cola and others.

Mr Shetty also had harsh words for Fifa, accusing it of "indifference" to the abuse of migrant workers, which he said was a "stain on the conscience of world football".

The Khalifa Stadium is part of the Aspire Zone sports complex, where facilities have already been used by some of the world's biggest football clubs, including Bayern Munich, Everton and Paris Saint-Germain, which trained there in the winter.

Amnesty has called on big World Cup sponsors such as Adidas, Coca Cola and McDonald's to put pressure on Fifa to tackle the issue.

"It is time for football's leaders to speak out or be tainted by association," Mr Shetty said.