A rare California Condor chick just hatched on the internet. Watch it emerge via webcam. 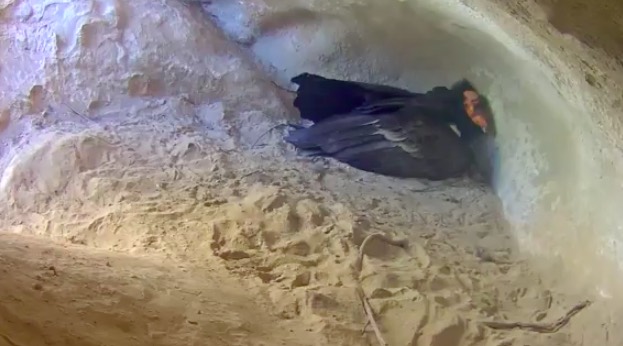 Watch the stream here, as the little baby meets its parents, and learns how to survive.

Biologists had set up cameras in a cliffside nest at Hopper Mountain National Wildlife Refuge in Ventura County in anticipation of the condor’s hatching, which happened at about 9:30 a.m. Monday.

“This live cam takes the viewer right into the nest cave with the condors to watch their behavior and hear the sounds they make, Charles Eldermire, Bird Cams manager at the Cornell Lab, said in a statement.

The egg was incubated as part of the California Condor Recovery Program’s captive breeding effort at the Los Angeles Zoo. The parents, California condor #111 and #509, had laid an egg in March that went missing, so biologists replaced the missing egg with a dummy egg so they would continue to incubate the nest.

Hopefully the little chick will make it to adulthood, and join the fragile population of critically endangered California Condor that live in California, Arizona and Baja California.

“We hope [the livecam] will really raise awareness about these spectacular but highly endangered birds and the threats they face,” Charles Eldermire, bird cam manager at Cornell Lab of Ornithology, told the Washington Post. “We know from past experience that people form a real emotional connection to the birds they see on the cams as they witness a part of nature they’ve never seen before.”

About the video stream: The condor cam is a collaboration between the Santa Barbara Zoo, the US Fish and Wildlife Service, and the Cornell Lab of Ornithology.