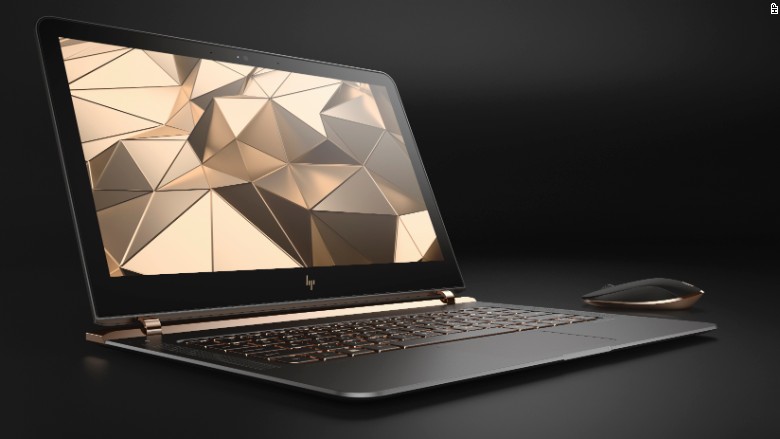 HP's Spectre is thinner than all the others, and the company says that it is "more artisan than manufactured" in a promo video that touts its slim, jewelry-like design. The $1,170 laptop has an Intel Core i7 processor, 8 GB of memory and a 13" display. It's 2.5 pounds: heavier than the 12" MacBook and Lenovo Yoga, but lighter than pretty much anything else and much more powerful than those machines.

The Verge's Jacob Kastrenakes says they're trying to "out-Apple Apple."

There are a few other interesting design flairs. HP is using a new, angular logo on the back of the machine that looks much sharper than the goofy circle logo you're used to. On the inside, the speaker grating is styled to look like repeating triangles, to either side of the keyboard. And the inside hinge is this curved, open arc. It's not something you'd typically see on a computer, and that makes it stand out in a nice way. Nash says it "steals from cabinetry or the high end furniture department."

To me, though, the classy bling look is more redolent of Sony's positioning of thin Vaio laptops in the early 2010s. It didn't work out for them.

CNN Monday reports that the company's in a fix and needs a hit.

HP is in need of a catalyst for its slumping PC division. In the last three months of 2015, HP reported a 11% slump in laptop sales and a 14% slip in desktop sales. Smartphones and 2-in-1 tablet-laptop devices have put pressure on PCs. People are also holding on to their older computers rather than upgrading. HP hopes the Spectre can spark a turnaround