The price of stealing an identity is crashing, with no bottom in sight 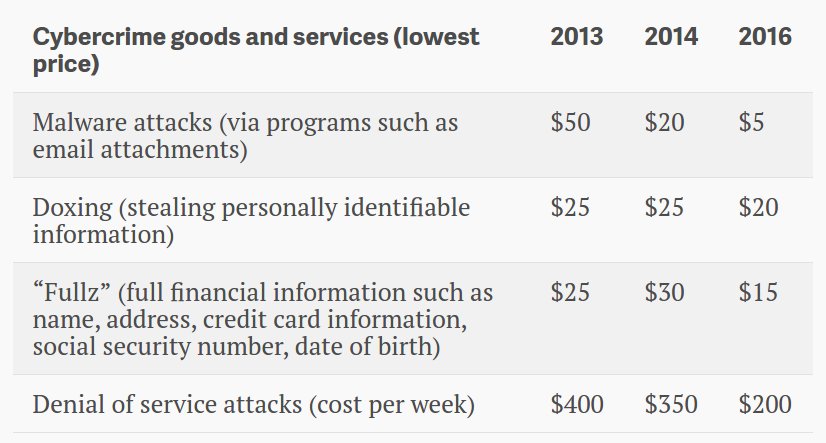 The sharp increase in known, unpatched vulnerabilities in the tools we use to access the Internet has caused the price of exploits is falling through the floor.

Of course, one way the crimeware market could recover is if the expected return on an identity theft could be raised — say, by merging different leaked databases with intelligence gleaned from identity theft exploits to steal whole houses.

Crooks are also acting more like normal businesses. Eager to please customers in a competitive marketplace, Russian hackers have started promoting round-the-clock customer service and placing ads promoting "free-trial attacks" and their "huge abilities." This year's hit product were upgraded ATM "skimmers" that capture the magnetic stripe data on the back of a debit or credit card priced at $1,775. Dell even observed new versions being manufactured with 3D printers, along with bluetooth and micro-camera accessories. For the aspiring thief on a budget, hacking tutorials were at the lowest price in three years—just $19.99.

It's never been cheaper to steal someone's digital identity on the internet
[Michael J. Coren/Quartz]