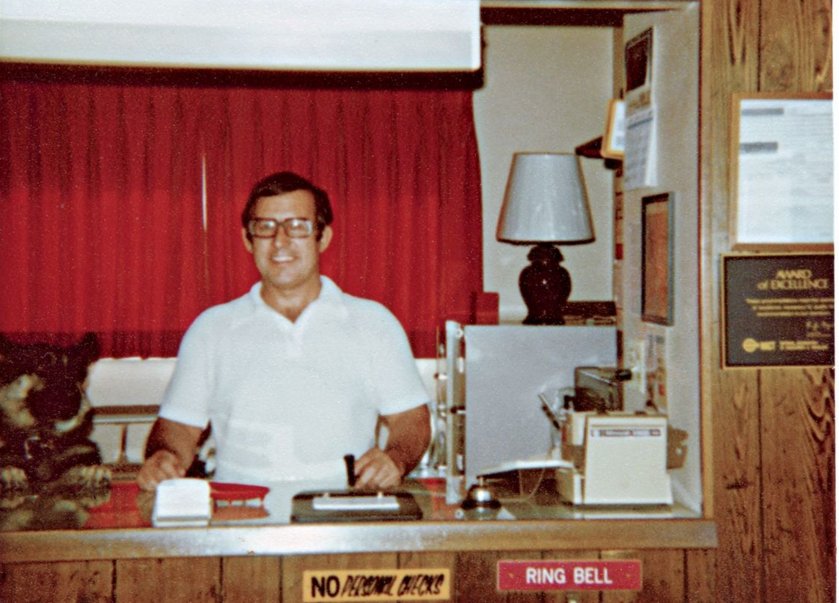 In 1980, New Yorker stalwart Gay Talese received a handwritten note by special-delivery: it was from Gerald Foos, a Colorado motel owner, and he revealed that he had been spying on his customers' sex lives for decades and taking meticulous notes, which he offered to share with Talese for his upcoming book, Thy Neighbor's Wife, a now-classic investigation into the hidden sex lives of Americans.

Talese flew to Colorado to see the motel that Foos had rigged for surveillance, punching holes in the rooms' ceilings so that he and his wife, a nurse, could lurk unseen and spy on guests' sexual activities in secret. Foos made Talese sign a confidentiality agreement, and explained that he had been a voyeur since boyhood, spying on an aunt as she undressed in a house across from his bedroom window. His wife, while not a voyeur, was very understanding of his proclivities.

True to his word, Foos had taken meticulous notes, filling reams of paper with his observations of cheaters; closeted gay people; swingers; forbidden interracial couples; gigolos; feuding holiday makers; fetishists, and more, across a wide swathe of human sexuality. Foos's notebooks -- which he began to send to Talese -- were full of self-serving and increasingly cynical and detached observations in a mock-clinical style that chronicled Foos's slide into a kind of obsessive misanthropy that left him hating the people he couldn't look away from.

Foos also claimed to have both caused and witnessed a murder, flushing a drug dealer's product down the toilet in secret, which led the dealer to kill his girlfriend. Talese tried to run this story down, but the police couldn't confirm a Jane Doe that matched the dates and places, calling into question the Foos's reliability. When Foos's first wife died of Lupus, he remarried, and his second wife was also a voyeur, and the couple bought and outfitted a second motel for surveillance.

Foos is a bizarre and fascinating character. He considers his own spying to be harmless, but rails at state surveillance, lauding Snowden as a heroic whistleblower and deploring the NSA's mass surveillance. He eventually released Talese from his confidentiality agreement, believing that the statute of limitations had run out on his last act of spying (he was forced to quit in 1995, when arthritis made it too difficult for him to ascend to his surveillance attic).

Talese is publishing a book about this in June, which includes excerpts from Foos's journal which his publisher, Grove Press, has paid Foos for.

As I read the sections of the journal he sent me, which covered the mid-nineteen-sixties through the mid-seventies, I noticed that his persona as a writer changed, gradually shifting from a first-person narrator into a character whom he wrote about in the third person. Sometimes he used the word “I,” and sometimes he’d refer to himself as “the voyeur.”

The entries become increasingly portentous, and Foos starts to invest the omniscient Voyeur character with godlike qualities. He appears to be losing his grip on reality. But only once, while posted in the attic, did he actually speak through a vent to a person below. He was looking down on Room 6, where he saw a guest eating Kentucky Fried Chicken while sitting on the bed. Instead of using paper napkins, the man cleaned his hands on the bedsheets. He then wiped the grease off his beard and mouth with the bedspread. Without realizing what he was doing, Foos shouted, “You son of a bitch!”