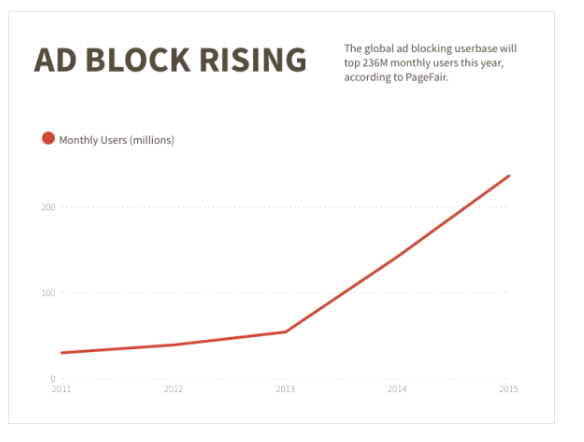 Brave is a new experimental browser from Brendan Eich, inventor of Javascript and co-founder of Mozilla. It comes with a built-in ad-blocker that only blocks third party ads, and replaces them with non-tracking ads from its own inventory, whose revenue is then shared with publishers and users, on better terms than most ad networks give.

17 members of the Newspaper Publishers of America published a damning letter this morning, called Brave "blatantly illegal" and a "plan to steal content."

Eich has written a response pointing out many of the factual errors in the newspapers' letter, making this crucial point:

Browsers do not just play back recorded pixels from the publishers’ sites. Browsers are rather the end-user agent that mediates and combines all the pieces of content, including third-party ads and first-party publisher news stories. Web content is published as HTML markup documents with the express intent of not specifying how that content is actually presented to the browser user. Browsers are free to ignore, rearrange, mash-up and otherwise make use of any content from any source.

If it were the case that Brave's browsers perform "republication", then so too does Safari's Reader mode. The same goes for any browser with an ad-blocker extension installed, or the Links text-only browser, or screen readers for the visually impaired.

This is a critical distinction. Eich's assertions of legitimacy turn on the idea that users get to decide what their computers do with the bits that newspapers send. This isn't just an important technical principle, it's an important moral one, too, one that resonates with questions of privacy and property.

The newspapers are upset that Brave plans to make money from their material, and Eich says he will share it with them, and they say, no, we want to be masters of our own destiny. You have to make a deal with us, not force one on us. It's easy to sympathize with this position, but for the newspapers' ideas to have legal -- rather than moral -- force, they'd have to establish that users aren't free to change how their browsers display the material they receive. This is a disastrous outcome -- and a legally dubious one.


If the newspapers make good on their threat to sue Eich, and they win, they'll be setting a terrible precedent that will echo down through all the devices and networked services that are to come.


Brave's Response to the NAA: A Better Deal for Publishers [Brave]