Another great Z-Burbia novel: 'Sisters of the Apocalypse' 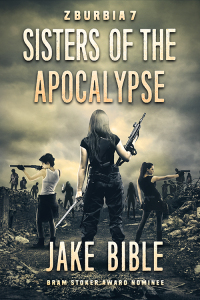 Jake Bible's Z-Burbia series has come a long way from its start in the suburbs of Whispering Pines. Sisters of the Apocalypse is the seventh installment, and focuses on Elsbeth, his ass-kicking female protagonist, and her lethal sisters.

Z-burbia started out as the story of a small gated community, just trying to get by in the zombie apocalypse. Terrible, and often hilarious things happen, in this slapstick horror. The community has destroyed the presumptive new government of the United States, survived cannibal hoards, and made their way to a new refuge in Colorado. This seventh novel in Bible's series focuses on Elsbeth Stanford, the daughter of one of the richest women in America before the zombies, and the rest of her very odd private school class.

Elsbeth is one of the most interesting characters in this series. She is tough, slightly brain damaged from a fall, and fiercely loyal. Bible has certainly found a way to keep this series pumping along.

Z-Burbia 7: Sisters of the Apocalypse via Amazon