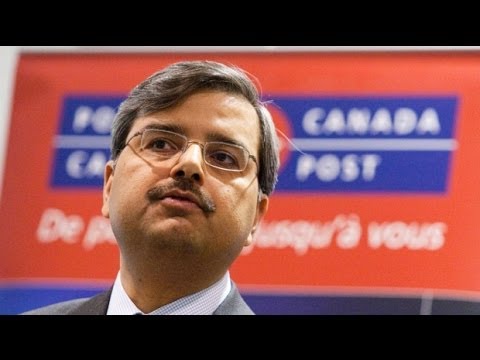 Derryl Murphy writes, "Former Canadian Prime Minister Stephen Harper gave Canada Post CEO Deepak Chopra (I know) a new contract a month before the election when he still had time on his contract, and Chopra's working hard to pillage the postal system in Canada. So I did this up for a little fun, but the word needs to get out there."

It's a petition to let Chopra keep his $500,000/year job, but for his duties be redefined as delivering postal mail in Ottawa.

*
Deepak Chopra be reassigned to an Ottawa depot as a letter carrier. With Canada Post's new contract demands insisting that employees can be transferred pretty much anywhere, this should be easy.

*
Deepak Chopra can continue to draw his $500,000/yr salary as a letter carrier, and his fellow posties will promise that they won't harbour any animosity to him for this wage gap.

*
However, Deepak Chopra will have to start unassigned until a position opens that he can successfully bid on. Based on slightly over 5 years' seniority, it is probable that at best he will get on as sick relief.

*
As a relief carrier, it's unlikely he will be able to finish many routes within the designated 8 hours. Any overtime accrued will only entitle Deepak Chopra to actual letter carrier pay (at time and a half), commensurate with his seniority.

*
If Deepak Chopra is injured on the job by, for instance, slipping on ice while trying to handle the two bundle system, he will be entitled to WCB at actual letter carrier rates. Like every other Canada Post employee, however, he will have to wait for possibly as long as two months for his claim to kick in. To tide him over he will be able to use all 7 of his annual personal days (which will be returned to him unless his claim is denied) and then his short term disability at 70% of normal letter carrier salary. He can top that up to 100% if he has leftover sick time, but considering his seniority date that is unlikely.

*
However, if Deepak Chopra just gets too sore and tired from carrying mail, packets, and admail in an overloaded satchel for up to 200 houses at a time, up to a distance of, say, 15-20 kilometers every day, then he only has whatever is left of those 7 personal days to use, after which he moves to short term disability.

*
If Canada Post locks out its employees, Deepak Chopra will be entitled to strike pay provided he puts in 20 hours per week on the picket line.