How to vote in the New York Democratic primary (please share!) 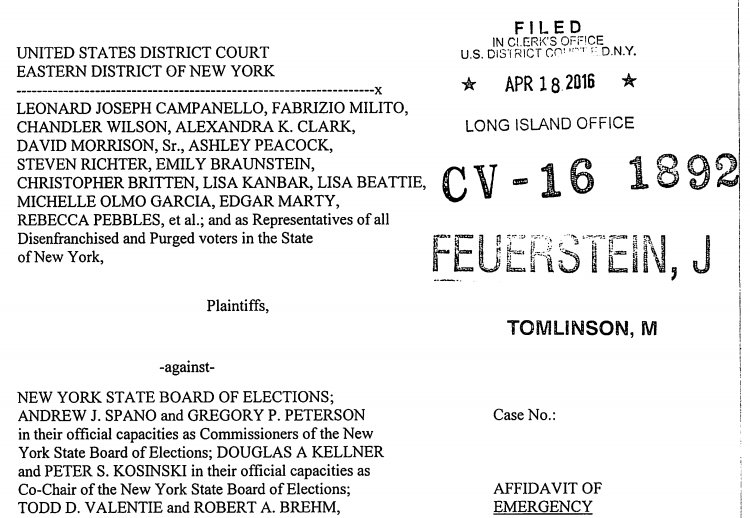 The New York State Democratic primary is a "closed primary" that excludes anyone who isn't a registered Democrat from casting a ballot. Many people say they are registered Democrat but have been purged from the list, or had their affiliations changed to Republican or Independent. Some have posted images of what they say are forged signatures on voter registration cards.

If you are a New York State voter who wishes to participate in the primary, but are not on the rolls, you may request an Affidavit or Provisional Vote at your polling place. If the lawsuit prevails, your vote will be counted.

Election Justice USA filed the emergency lawsuit in New York the day before the primary. The lawsuit is requesting the "immediate restoration" of voting rights for any New York voters who had previously been registered to vote and now are not. It also seeks to restore the voting rights of any New York voter who had previously registered or voted as a Democrat and is now listed as unaffiliated or Republican. Because the New York primary is closed, you can only vote for the party with which you're registered.

We have heard hundreds of stories, with desperate pleas for help. This election season has excited and galvanized the voting public in unprecedented numbers. For these voters to be systematically and erroneously removed from the rolls or prevented from voting in their party of choice is devastating to them personally and has sent a wave of doubt and worry through the voting public."

According to Gothamist, the lawsuit reads:

As of Friday, more than 200 voters had signed onto the lawsuit. The case is called Campanello et al v. New York State Board of Elections et al