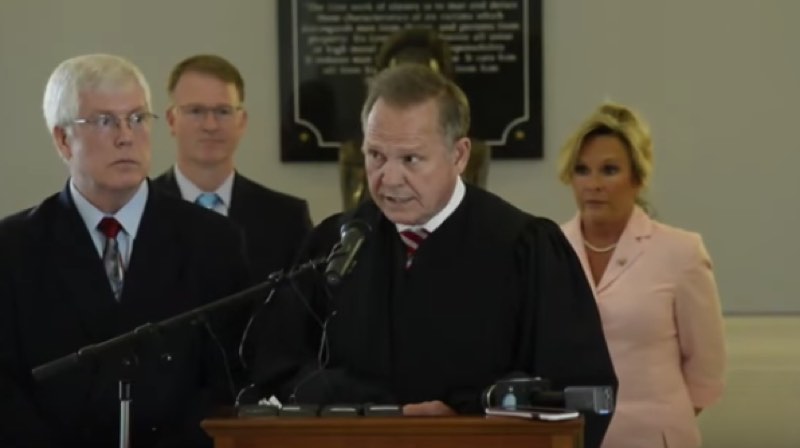 He says these foes brought forward a politically motivated complaint about his administrative order to probate judges not to issue same-sex marriage licenses. Chief Justice Roy Moore also blamed the Southern Poverty Law Center for getting in the way of his gay marriage squashing orders.

You can watch his wacky rant here.

Chief Justice Moore says their complaint should not have been issued to the Judicial Inquiry Commission of Alabama, which could determine whether Moore is brought up on ethics charges. Instead, Moore and his lawyer argued that the SPLC, the Human Rights Campaign, and other pro-marriage equality advocates in the state should be bringing their complaint to the U.S. Supreme Court.

After the U.S. Supreme Court's 2015 ruling that made same-sex marriage legal in America, Moore ordered the state's probate justices not to issue marriage licenses to gay couples. Moore maintained that the Supreme Court ruling had no bearing on Alabama's constitutional ban on gay marriage.

"This is not about religion," Moore said at the press conference. "This is about my marriage and my legal orders."

In the video above, “Alabama Chief Justice Roy Moore responds Wednesday, April 27, 2016, to complaints made in January by various groups protesting his administrative order explaining the Alabama Sanctity of Marriage Act and the Alabama Marriage Protection Act in Montgomery, Alabama.”