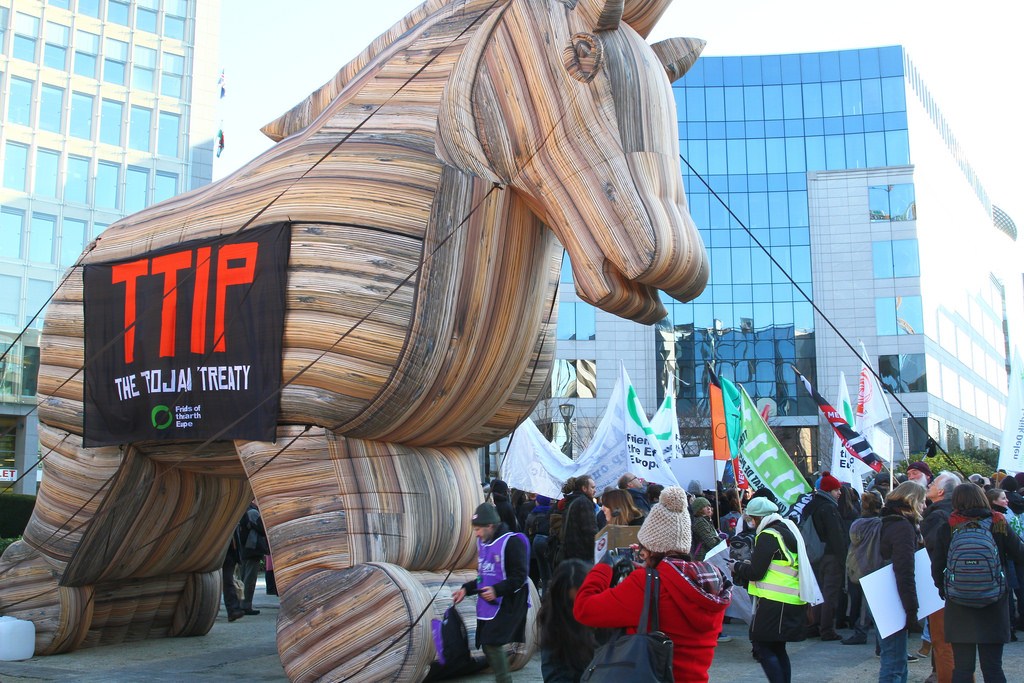 Greenpeace has handed newspapers 240 pages of current negotiating documents from the Transatlantic Trade and Investment Partnership (TTIP), a secretly conducted trade deal between the USA and the EU, which has run in parallel with the notorious Trans Pacific Partnership (TPP).

The documents reveal that the worst fears of TTIP's critics were fully justified: as with the TPP, TTIP gives multinational corporations the right to sue governments to change environmental, labor and social standards if they interfere with the corporations' profits, under the notorious Investor State Dispute Settlement system (previously).

The Greenpeace leaks violate the European Commission's 30 year ban on publication of negotiations documents, and have made the issue a matter of intense interest in Europe.

The European Commission slapped a 30-year ban on public access to the TTIP negotiating texts at the beginning of the talks in 2013, in the full knowledge that they would not be able to survive the outcry if people were given sight of the deal. In response, campaigners called for a ‘Dracula strategy’ against the agreement: expose the vampire to sunlight and it will die. Today the door has been flung open and the first rays of sunlight shone on TTIP. The EU negotiators will never be able to crawl back into the shadows again.

The leak of the TTIP text comes at a time when senior politicians across Europe have already begun to distance themselves from the increasingly toxic deal. President Hollande announced this weekend that France will veto any TTIP agreement that could endanger the country’s agricultural sector. Germany’s economy minister Sigmar Gabriel has also spoken publicly of TTIP collapsing, and has pointed the finger at US intransigence as the cause. When politicians start playing the blame game in this way, you know they are already preparing their exit strategies. The writing is on the wall.

After the leaks showing what it stands for, this could really be the end for TTIP
[John Hilary/Independent]