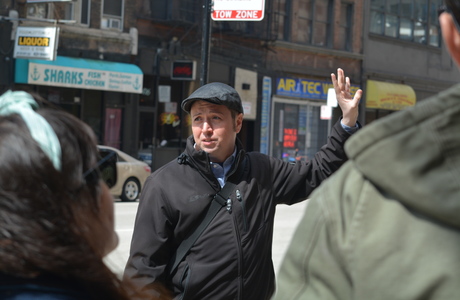 Journalist Paul Dailing, creator of the 1001 Chicago Afternoons blog, has created a walking tour of the most corrupt sites in Chicago's fantastically corrupt history, and it's selling out.

The Windy City gets its name from the long, windy speeches of its legendarily corrupt legislators, but the corruption doesn't stop with the debates. The entire midwest was founded through a land scam, and things continued in that vein right up to the present day, all the way up to former GOP Speaker Dennis Hastert admitting to sexually assaulting the boys in his charge when he was a high-school football coach.

The three hour tours run weekly, and begin with site of Alderman Michael "Hinky Dink" Kenna's 1900s-era bar, from which Kenna and his partner procured city contracts and resold them to their cronies, at a healthy markup.

The tour focuses on politicians, brushing only lightly over organized crime, and hardly touching on Al Capone, whom Daling loathes, and believes to have been turned into a folk hero despite his awful crimes.

He dives deep into the stories of the seven Illinois governors who have been charged with crimes, including four who have gone to prison since the 1960s.

Even for Chicagoans steeped in their city's history, the tour was an eye-opener.

"You always hear about how Chicago is so corrupt, but I didn't know about all the details he's going into," said Kara Hart, a financial controller at a technology company, who went on Sunday's tour.

Some mobsters are included, including Fred Roti, a made man in the Mafia who was an alderman for 23 years and was convicted of bribery and other crimes.

So much corruption, stuffed into one Chicago tour
[Fiona Ortiz/Reuters]