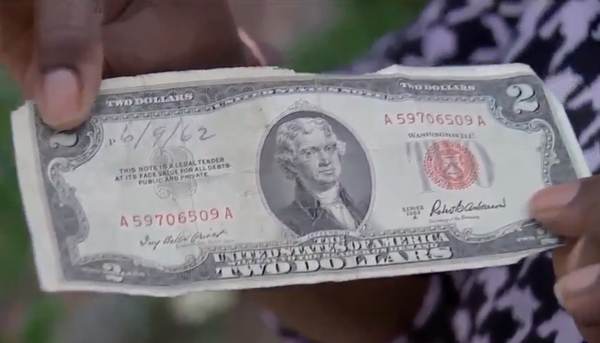 Alert administrators at a Houston, Texas, public school called police when a 13-year-old student tried to use a $2 bill to buy chicken nuggets from the cafeteria. An officer went to the school office where the girl was being held, scaring the hell out of her and calling her grandmother with dire warnings about federal counterfeiting crimes being committed.

Bill in hand, the officer went to the store that gave the $2 bill to the girl's grandmother and questioned them, then went to a bank with the bill, where he was told that $2 bills are legal tender. The officer never apologized to the girl, who missed her lunch that day.

That's right: the 13-year-old didn't even receive an apology from the authority figures, even though she was ultimately denied lunch that day, according to her grandmother. Grandma also had this to say: "It was very outrageous for them to do it. There was no need for police involvement. They're charging kids like they're adults now."

I’m feeling sad for humanity. “Selfie wrist” is a thing. According to CBSNewYork, San Francisco doctor Levi Harrison is seeing a rise in an injury caused by “hyper-flexing your wrist inwards to capture the perfect selfie angle.” “Selfie wrist” can reportedly cause numbness and a tingling sensation that people feel in their fingers and wrists. […]

The latest sign of the Apocalypse: Sour Patch Kids, the cereal

An open letter to Post Consumer Brands: In regards to your new Sour Patch Kids cereal, I quote Dr. Ian Malcom (and if there was EVER a time to pull out this quote, it’s now): “Your scientists were so preoccupied with whether or not they could, they didn’t stop to think if they should.” And, […]