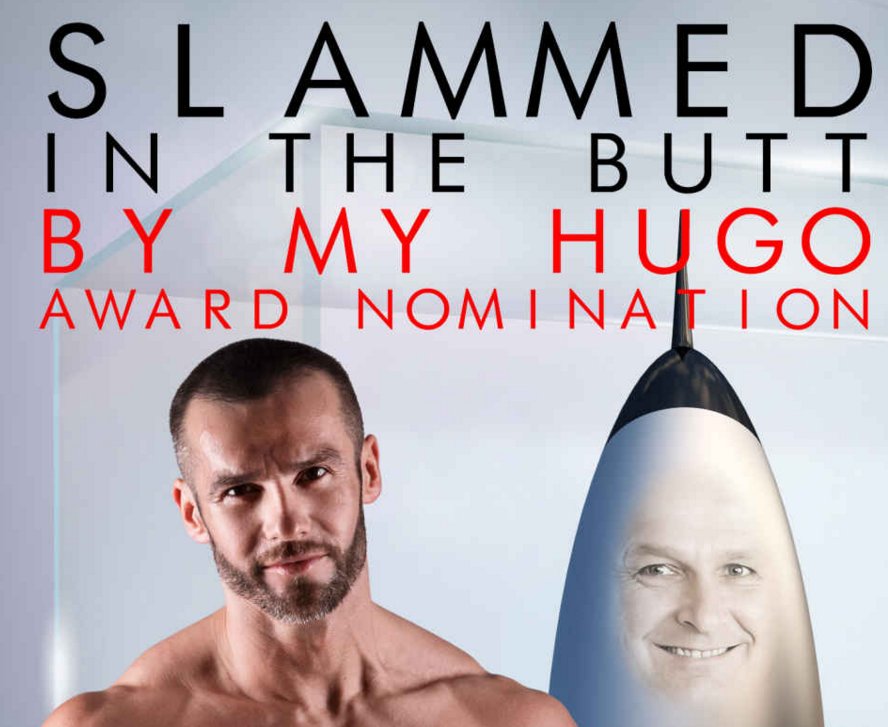 Until now. When Tingle -- who publishes "bizarre niche erotica" in great volume -- discovered that his book Space Raptor Butt Invasion had been promoted to the Hugo ballot by spoilers hoping to discredit the award, he sprang into action. He created a new title, especially aimed at the "Puppies" (the two groups who want to kill the Hugos call themselves "Rabid Puppies" and "Sad Puppies" for fantastically tedious reasons you can look up for yourself if you care to): "Slammed In The Butt By My Hugo Award Nomination."

The crowning glory of Tingle's campaign, though, was his announcement that his Hugo Award, should he win it, would be accepted by Zoe Quinn, the reigning bogeywoman of the Gamergate/neoreactionary right. In other words: every time a "Puppy" casts a vote for Tingle's work, they cast a vote for giving Zoe Quinn a podium from which to address the entire World Science Fiction Convention about the importance of diversity and representation in fiction.

It is truly glorious.

As hilarious and thorough as these VOXMAN owns are, mere Twitter owns aren't enough to defeat a campaign whose main goal seems to be attention for Day. He's expressed, in so many words, that hate can only make him stronger.

That's where the third prong of Tingle's trolling makes a difference. As the Daily Dot's April Siese discussed in her recent profile of Tingle, the hard and sexy author's true identity remains a mystery. He cannot very well reveal himself by showing up to an award ceremony. So, in his place, he has invited perhaps the one person internet alt-rightists and Gamergate-adjacent agitators hate most.

Zoe Quinn, game developer and anti-harassment activist, was the original target of Gamergate after an ex-boyfriend revealed alleged details of her sex life online. She's the boogeyman (boogeywoman?) Gamergate frothingly rose up to "defeat," their imaginary platonic ideal of a "Social Justice Warrior."
And she's also a Tingle fan—a "true buckaroo," as Tingle says.