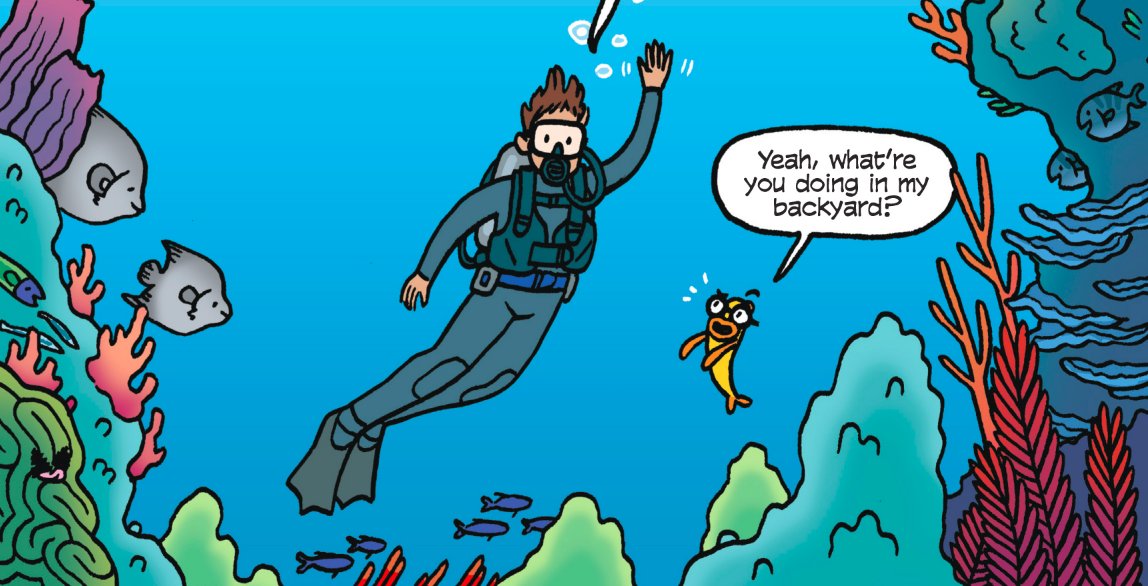 In honor of Free Comic Book Day, we present this essay by Maris Wicks, author of Science Comics: Coral Reefs: Cities of the Ocean, and the co-author, with Jon Chad, of "Science Comics," a free comic available in comics stores all over the world today. See the bottom of the post for an exclusive preview of Science Comics!

And that leads me to perhaps a more important answer to the question “Why comics?” After spending years as an educator, and ruminating on my own personal experiences in education, I found that comics and cartoons were one of the most engaging ways to share information. Teachers and librarians have recognized that comics are often a way to get reluctant readers reading. Watching kids gobble up any kind of comics, and even better, create their own, is fantastic. So now let me ask a slightly different question:

“Why science comics?” Well, there’s still my initial “I can’t help it.” On a selfish level, I just really love science and want to find any way jam information about gastropods or the circulatory system or solar nebulas into my personal work. On a less-selfish, more reflective level, I will tell you that I was a reluctant reader and an average student who struggled in Math and English. Part of the reason that I struggled was that I was (and still am) a hands-on visual learner, and the older I got, the fewer of those experiences were available to me in the public school system. Add the social pressure of middle school to the mix, and I became a painfully shy kid who nearly slipped through the academic cracks. When I had difficultly learning in school, I believed it to be my own fault, and as a result, I felt dumb. It took years to realize that I wasn’t dumb, and that I could actively learn about any subject, even the ones that I had previously struggled with. I just needed to find the way that I learned best. But I only realized this as a grown-ass adult, and at that, one who had access to educational support in family and teachers.

With all that in mind, when I set out to create comics about science, I have “little Maris” in mind, and any other kids out there who are faced with similar struggles when it comes to learning. If I can take a subject and explain the way that it makes most sense to me, maybe it will resonate with others. Even now, as I write this, I’m thinking to myself that this article would work better in comics form.