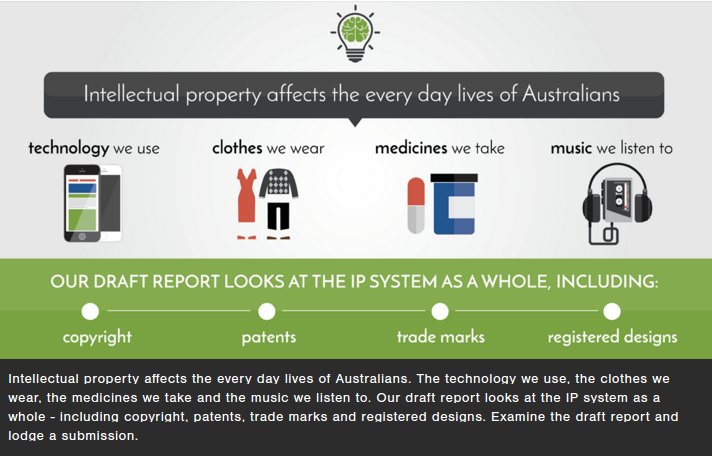 The Australian Productivity Commission has published its long-awaited, 600-page draft report on the country's copyright and patent laws, which are largely the product of diplomatic pressure from the US government, fronting for US entertainment industry associations.

The report, which was commissioned in part to investigation the codification of fair use in Australian copyright law, condemns virtually the whole edifice of Australian IP law. It calls for shorter copyright terms, more flexibility for copyright users, stricter criteria for granting patents, tightened rules and shorter terms for software and business-method patents, and more.

It specifically calls out Australia's trade relations with the USA as the source of Australia's worst policies, a note sounded just as Australia and the USA are moving to finalise the Trans Pacific Partnership, which will put American corporations in charge of Australian information law for the foreseeable future.

Word of the report trickled out ahead of its release, prompting the Australian entertainment industry to commission a widely discredited report from Pricewaterhousecoopers, predicting that a fair use right in Australian copyright law would cost the country AUD1B.

The Productivity Commission's 600 page draft report was in fact released ten days later, and apart from recommending the adoption of a fair use right, it also makes a number of other recommendations for the reform of copyright and patent laws. Amongst its key recommendations are:

*
Making it harder for obvious inventions to be patented, by raising the standard for the inventor to demonstrate an “inventive step” to the slightly higher level that already exists in Europe. Since even this would still allow too many low-quality patents through, the Commission recommends pursuing multilateral discussions about raising the threshold further.

*
Restricting the availability of patents for software and business method inventions, which are an impediment to further innovation. As regards software, the Commission notes that software development cycles of around 5 years are far shorter than the 20 year term of protection granted by patents, and that other incentives for software development (among them copyright) also exist.

*
Copyright should be supplemented with a fair use right, that would allow works to be freely used in ways that are socially beneficial and cause minimal harm to the copyright owner, using a U.S.-style four factor balancing test. Anticipating the rightsholders' objection that this would create legal uncertainty, the Commission suggests that a range of illustrative uses could be included in the legislation, and notes that U.S. case law will provide further guidance to Australian courts.

*
The law should clarify that users are entitled to bypass geoblocks that lock lawfully available online content away from Australian users, or require them to pay higher prices to local content distributors. As the Commission notes, this practice harms Australian users and only encourages them to engage in unlawful downloading of content.