Canada's Fort McMurray wildfire is so massive, you can see it from space 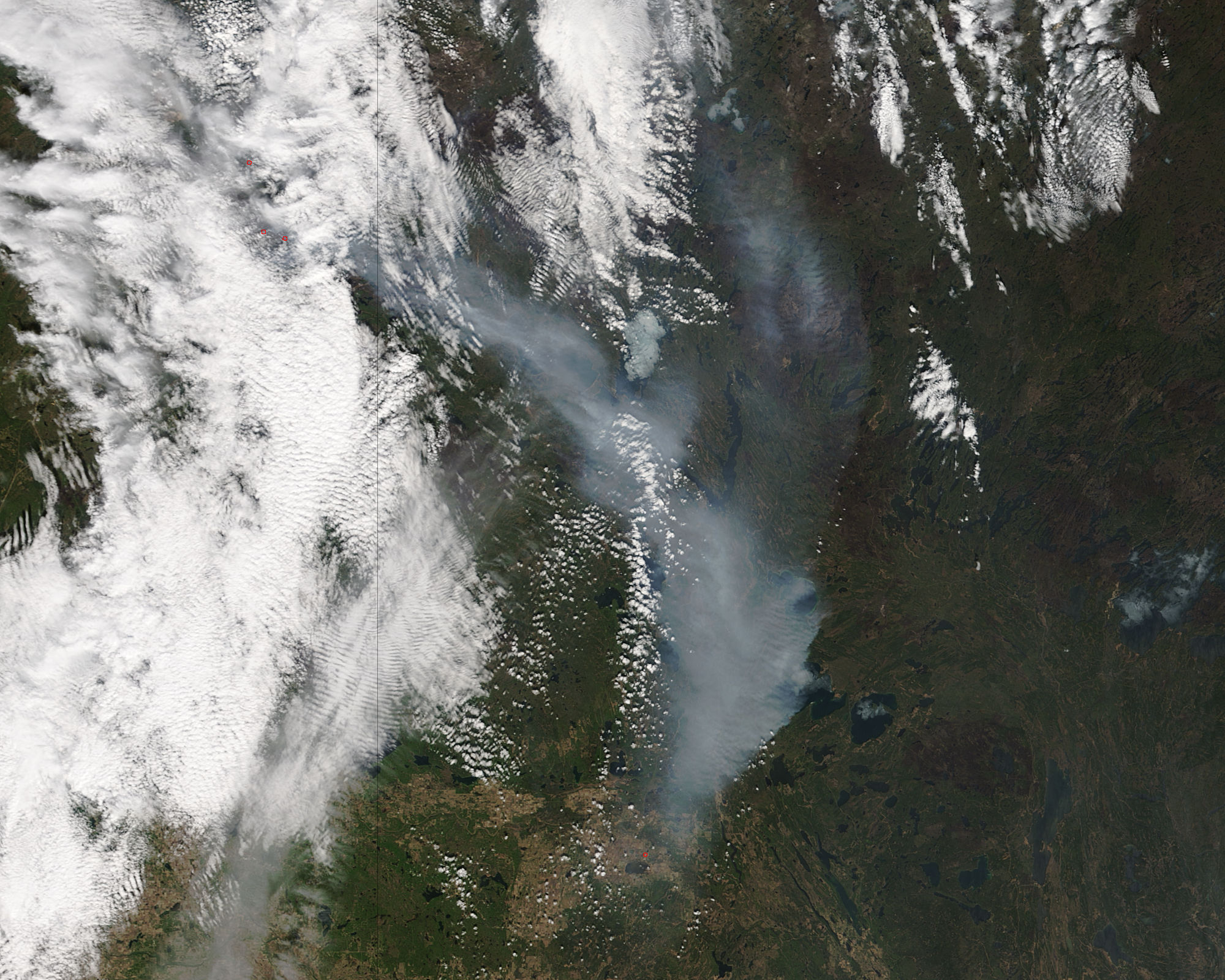 On May 8, 2016, the MODIS instrument on the Terra satellite captured this image of Ft. McMurray Fire in Alberta, Canada. [NASA Goddard MODIS Rapid Response Team]

The massive wildfire that continues to burn in the Fort McMurray area of Alberta, Canada has been captured from space by NASA imaging satellites.

Thousands of people in the fire's path have been left homeless and displaced.

The unprecedented scope of the blaze is apparent in these photos released by the U.S. space agency today.

“Fire conditions remain extreme in the province due to low humidity, high temperatures and wind according to the emergency updates being released by the Government of Alberta.”

The Suomi NPP satellite captured this image on May 08, 2016, of the wildfires currently burning in Canada. [NASA/NOAA/DOD]

The latest update on the wildfire from by the Government of Alberta was issued Sunday, May 8, 2016 at 4:15pm local time:

Currently there are more than 500 firefighters battling the blaze in and around Fort McMurray, along with 15 helicopters, 14 air tankers and 88 other pieces of equipment.

Yesterday’s plan (on May 07) to evacuate 25,000 residents who fled north of Fort McMurray was a success. As of 10:00am, no evacuees have been reported remaining in camps to the north. 300 people from Fort McKay were evacuated to the Edmonton area by air and ground. This was a precautionary evacuation due to heavy smoke in the area.

1,500 employees at the Syncrude facility were evacuated on May 7 and the facility was shut down. Groups of employees have also been evacuated from the Suncor, Husky, Shell and CNRL facilities. Many of these facilities are still operating. 250 ATCO employees are in Fort McMurray working to restore the power grid and assess the gas infrastructure.

Fire conditions remain extreme, with four new starts across Alberta yesterday. A total of 34 wildfires are burning, with five out of control, 23 under control and six turned over to the responsible parties.

More than 1,500 firefighters, approximately 150 helicopters, 222 pieces of heavy equipment and more than 28 air tankers are fighting the fires across the province.

Temperature forecast for Sunday is 18°C (64 degrees F) with winds gusting up to 50 kilometres per hour (31 mph). There is the potential for showers in the Fort McMurray area.

Below: Smoke billowing away from the fires heads out across the Atlantic Ocean, and Aqua satellite captured this image of its eastward trail.

The MODIS instrument on the Aqua satellite captured this image on May 08, 2016, of smoke from the Ft. McMurray wildfire and other Canadian wildfires billowing across the Atlantic Ocean. [NASA Goddard MODIS Rapid Response]

Related reading: Fort McMurray And The Fires of Climate Change, in the New Yorker.

Though it’s tough to pin any particular disaster on climate change, in the case of Fort McMurray the link is pretty compelling. In Canada, and also in the United States and much of the rest of the world, higher temperatures have been extending the wildfire season. Last year, wildfires consumed ten million acres in the U.S., which was the largest area of any year on record. All of the top five years occurred in the past decade. In some areas, “we now have year-round fire seasons,” Matt Jolly, a research ecologist for the United States Forest Service, recently told the Times.

“You can say it couldn’t get worse,” Jolly added, but based on its own projections, the forest service expects that it will get worse. According to a Forest Service report published last April, “Climate change has led to fire seasons that are now on average 78 days longer than in 1970.” Over the past three decades, the area destroyed each year by forest fires has doubled, and the service’s scientists project that it’s likely to “double again by midcentury.” A group of scientists who analyzed lake cores from Alaska to obtain a record of forest fires over the past ten thousand years found that, in recent decades, blazes were both unusually frequent and unusually severe. “This extreme combination suggests a transition to a unique regime of unprecedented fire activity,” they concluded.

All of this brings us to what one commentator referred to as “the black irony” of the fire that has destroyed most of Fort McMurray.

The town exists to get at the tar sands, and the tar sands produce a particularly carbon-intensive form of fuel. (The fight over the Keystone XL pipeline is, at its heart, a fight over whether the U.S. should be encouraging —or, if you prefer, profiting from—the exploitation of the tar sands.) The more carbon that goes into the atmosphere, the warmer the world will get, and the more likely we are to see devastating fires like the one now raging.